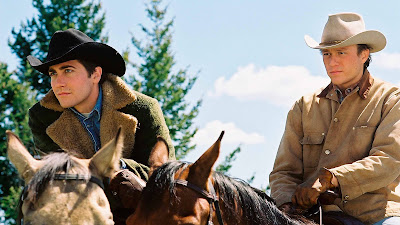 I don't really have any reason for putting off a Brokeback Mountain viewing. I was fairly young when this film first came out and there were a few of my friends that had mistakenly watched the film with their unsuspecting parents and came to school the next day making fun of the films subject matter. Its unfortunate but that's the way kid's are when they don't understand something.

The fact the two main characters are two gay men doesn't really matter because this Ang Lee directed feature is a love story. It would be just as effective with a lesbian relationship and I bet it would even work with two heterosexuals.

Brokeback is a story about two young men Ennis (Heath Ledger) and Jack (Jake Gyllenhaal) who begin get a job supervising a large group of sheep up on the titular mountain. During their time isolated on the mountain the pair bond and eventually have sex after weeks alone. Its the start of a forbidden relationship that would remain hidden for many years.

What really shocked me about this film was the scale. This film is epic. Its spans more than 20 years and it gets to the point where Heath Ledger and Jake Gyllenhaal are playing men who are twice their age but with the effectiveness of mature men. Both men earned Oscar nominations for their roles both of which are well deserved. For some reason Gyllenhaal is forced into the supporting actor category although he basically has as much screen time as Ledger and neither character is really more important than the other.

As the men age their relationship still continues despite getting married to women and having kids. Jack will always come around and take Ennis out on a "fishing trip" out in the wilderness where their love began. Lee's use of the locations makes the film that much more beautiful as well. The mountain itself is such an important part of the film and almost is a character itself. The mountain is a place where the world around them can't find them and their lives outside of the era don't matter.

Ennis is the more subdued of the pair and he never really feels comfortable with his homosexuality (due to some fear that had been in his mind since childhood) and never allows himself to start a life with Jack. Each man's wife is also forced to suffer due to their husband's absences. Michelle Williams is especially great as Ennis' young wife who begins to see the connection between Jack and her husband. Neither woman is really able to have the fully attentive husband that they probably deserve.

Ang Lee is able to convert this story into a topic that is really quite universal. Its really about love and wanting something you can never truly get. The audience doesn't really get the ending that it wants for the characters. The ending definitely doesn't pull any punches and leaves a lot up for interpretation, but its a film that really makes you think. I was a little shocked by how sharply the ending hits but it some ways it only makes the film more real. It doesn't matter if you're gay or not. Brokeback Mountain is a film that should be seen.

Brokeback Mountain gets 85 out of 100