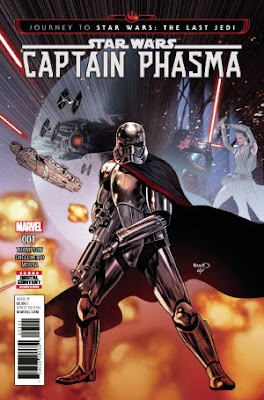 Captain Phasma is finally starting to get some attention in Star Wars canon thanks to the new Journey to The Last Jedi line of novels and comics. This will almost certainly lead into what should be a bigger role in The Last Jedi. Force Friday brought the release of the new novel titled Phasma that I am currently reading and hoping to review in a few weeks when I finish and this new comic will give some more information about her.

The comic begins right after Phasma is dropped into the trash compactor by Han Solo and Finn. The event was shown in The Force Awakens just before the destruction of Starkiller Base. Phasma was originally thought to have died in the trash compactor until Lucasfilm executives confirmed that she would return for the next movie.

Phasma lowering the shields in The Force Awakens was an action that some fans thought was a little out of character. It needed to be in done in order to give the Resistance a chance to attack Starkiller but this comic does explain that moment a little better as Phasma finds a way to delete the records about her lowering the shields thanks to her high code clearance.

Phasma then uses the record to blame another First Order officer for lowering the shield but this action will only work if she is able to kill the man she is sticking the blame on. Meaning she must find and kill this man in order to save herself.

Its nice to see a comic taking place during the new trilogy. Phasma doesn't get much exploration as a character but her smarts are on full display but it does show that she isn't afraid to play dirty if she needs to. There is some room to go but I'm still very interested in this comic.