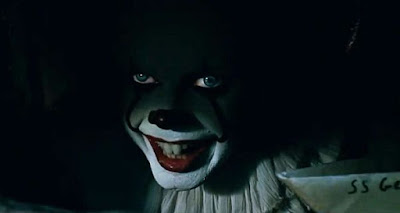 The IT novel is one of my favorite works of fiction of all time. The epic novel is quite possibly Stephen King's best work (although I'm sure most people have their own taste). Its by far the longest novel that I have read to date. While I don't hold it as dearly as the book I still really enjoy the television mini series that came out in 1990. I feel that version is about as good as it can be considering it is limited in order to be suitable for TV. A feature film adaptation of IT had been rumored to be in the works for years and finally in 2017 we have gotten a film.

The IT film did have a few problems early in production as Cary Fukunaga, who was originally tapped to direct left the project in favor of Andy Muschietti and the original actor who was cast as Pennywise the Clown Will Poulter left the project as well and was replaced by Bill Skarsgard. Other than that the film had an incredible amount of hype for a horror film thanks to a stellar marketing campaign and good early buzz.

IT is a story of a group of seven kids (often referred to as the Losers Club) who live in a small town in Maine that has been terrorized by a monster that takes the shape of a clown. The monster feeds on children ever 27 years and then goes back into hibernation. This monster has the ability to shapeshift into any child's worst fear. The first part of this two part story takes place in the late 80s where the book and miniseries takes place in the 1950s, but obviously after the long wait between adaptations this is a change that is welcome.

Andy Muschietti does not create a direct adaptation of the book. There weren't very many points there I felt like the film was following the book closely, but all in all it didn't really matter because the characters are 100% spot on. Everything that I loved about these young kids is on full display thanks to a great script and great performances.

IT feels like a mix of Goonies and Nightmare on Elm Street. Two movies that I absolutely love. The kids have such a great dynamic and you can see things in these characters that you may remember about yourself growing up. They are young, innocent and scared and Pennywise the Clown sees them as prey.

Each kid has their own specific fear. Bill has already lost his brother George who has disappeared. Beverly lives with her abusive father, Eddie's mother has taught him to fear infection and getting sick, etc. The IT monster feels like an impossible opponent for them, an entity that they definitely can't beat. Every adult involved in the film is either painted as a bit of a villain or someone that is not going to help the children. Whether that is a result of the trance the monster has over the town or not is up to question, but these kids are on their own.

Pennywise is a great marketing tool and a lot of the promotional images in the film featured the creepy clown in order to generate interest in the film, but Pennywise isn't really the best part of the film. The kids and their dialogue are. However, Pennywise is cause for a lot of really great scares. I haven't seen a film that has scared me this much in a long time. Bill Skarsgard had big shoes to fill (literally) in the Pennywise role. Tim Curry was undoubtedly the strongest performance in the miniseries and Skarsgard was never going to be able to better that performance without completely taking over film. Not only did I find that Skarsgard made the character his own but I was glad that apart from a few sequences most of the Pennywise moments were things that we've not seen on screen yet. Pennywise certainly feels like much more of a threat than his did in the miniseries as the rating allows him to be a lot more brutal.

I was shocked to see that IT was such a long film but considering the book was an epic I can justify watching a lengthy film. It basically ended where it needed to end. As most people expect there will be a second film dealing primarily with the adult version of the characters. Miniseries did fall apart a bit in the third act of the adult story. Muschietti has his work cut out for him trying to create the characters we love as adults. Casting is likely going to be a big issue as well.

IT gets 86 out of 100
Labels: bill skarsgard finn wolfhard horror