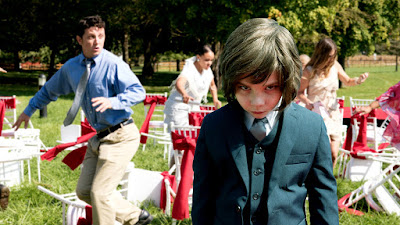 Horror/comedy became a great blend of genres in the past but outside of a few really solid entries most of the dabbles in this genre have been a disappointment in recent years. Little Evil certainly had some potential to change my mind as it was coming from the brain of Eli Craig the writer/director of the horror comedy Tucker & Dale vs. Evil. A film that has generated a huge cult following due to popularity on Netflix. Little Evil is a Netflix original and it honestly seems like we are getting new original films from them once a week now.

The film stars Parks and Creation's Adam Scott in the lead and the film basically serves as a parody to Richard Donner's The Omen. Scott plays Gary, a realtor who recently married Sam (Evangeline Lilly) without really taking any time to get to know her quiet young son Lucas (Owen Atlas). Gary constantly finds Lucas doing weird and creepy things and his new wife seems to be completely oblivious to it. With the help of some of his friends he comes to the conclusion that his new step son may be the antichrist.

Little Evil falls into a hole that many horror comedies do. It doesn't really seem to give you enough laughs or scares. Its certainly attempting to be a comedy more than a horror film as many classic horror films are spoofed with The Omen and Poltergeist being the two obvious ones. There are some characters that are pretty funny including Gary's lesbian friend Al (Bridget Everett) and Tucker and Dale's Tyler Labine teams up with Craig again for a fairly funny scene but the film isn't really consistently funny enough to be memorable.

The first hour really develops the rivalry between Gary and his step son that starts a bit of tension between Gary and his wife. Evangeline Lilly's performance is a bit overcooked but I'd guess that is intentional. In the final half hour Craig makes an attempt to bring the two enemies together and its such a jarring move. The attempt to develop the characters does make them more enjoyable but its something that should've been done earlier in the run time and at that point it doesn't really feel earned.

Clancy Brown jumps in and out as an over the top Reverend. I felt like they could have played him for a few more jokes. Brown's role doesn't really appear to be an important one until the end and we could always use more of him around. Overall, Little Evil is very watchable but doesn't rival Eli Craig's effort in Tucker and Dale vs. Evil. I'll still be interested in seeing what he does next thought because there could've been a great movie made with this material. Its just not quite executed like I'd hope.