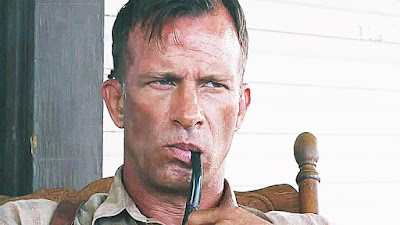 As many other reviewers are saying 2017 is a year for Stephen King. The famed horror novelist has had several adaptations of his work released in the last few months. Some have been good and some haven't been so good. If you ask me 1922 falls in the middle of the pack.

Based on King's short story released in 2010 as part of his Full Dark, No Stars collection. 1922 is about a proud farmer who convinces his young son to turn on his mother who is set on selling 100 acres of land that she inherited from her deceased father. Their irredeemable action completely chances their respective lives from that point on. The plot is very simple but there is a bit of gray area on what could be considered a spoiler for this movie.

Thomas Jane plays the farmer and father with an excellent southern drawl. As someone who isn't from the area it was almost hard to decipher at times but it was still very effective. This man (Wilf) has become resentful of his wife Arlette (Molly Parker) and the hated between the too former lovers is very clear. Wilf has pride in his farm and his land but his wife seems to be convinced that selling her fathers land, moving on to the city, divorcing him and taking his son with her is the best thing to do with what is rightfully hers. Parker certainly plays the villain in the opening moments and Jane's character motivations do work.

1922 runs at about 100 minutes based on the 131 page story and I would say that I was only really engaged in the first hour. The climax of the story takes place so early on that things just float around for the last 40 minutes. Wilf and his son Henry take action early. The story really resembles the "deal with the devil storyline". The pair commit this act in order to bring what they feel will be success, but their deed looms over them and both man and son drop into insanity in the years that follow 1922.

The usage of disgusting rats throughout the story is a great use of symbolism and they follow Wilf wherever he goes and he can no longer keep them hidden. The act that he thought would give him goo fortune only sent him further back. 1922 is certainly a watchable Netflix entry but it's fluttering around no man's land when the conversations about the best King adaptations come up.