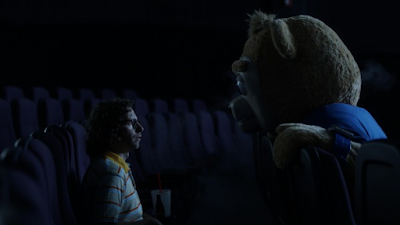 Brigsby Bear is one of the most heartfelt movies of the year and it belongs near the top of my favorites list for 2017. I'd be lying if I wasn't tearing up a bit at the end of this movie. The film comes from the brain of a man I know little about, Kyle Mooney. Mooney co-wrote the script and stars in the film which is helmed by a rookie director Dave McCary.

I think its best to go into this movie knowing very little about what happens in the film. The marketing material does an impressive job of keeping the plot under wraps. Just to give you some context I'm going to give you a short relatively spoiler free synopsis. Mooney plays James, a young man who basically finds out that the life that he has been living his a lie and he essentially enters a whole new life that he never knew existed. The only thing left from his old life is a TV show called Brigsby Bear, a show that was created specifically for him and him only. He continues to hold on to his old life when he decides to create his own Brigsby movie in order to give the character some finality and share his love with the world.

This is a film about embracing your passions and sharing them with others. James would be considered underdeveloped in our world because he lived a life that was so sheltered from true reality. This is partially played for comedy but its very natural for the character considering what he has gone through. He is oblivious to the concepts of our modern world and it really works. Mooney brings a likeability to the character and the film doesn't delve to deep into his struggles it just uses his passion for Brigsby to get over all his obstacles.

Most people will find something that they will connect with in the movie. Brigsby represents some sort of fandom that most people have these days whether it is movies, books, art, science, or whatever. I really understood James connection with the character because I feel like I have that sort of relationship with some fictional characters like that.

Mooney is undoubted the star of the show despite a very good supporting cast. James finds himself an ensemble of friends that help him to create his Brigsby movie. Matt Walsh gets a great quality role and he gets a chance to show some range. One actor I really appreciated in this film was Mark Hamill who was perfectly utilized. Hamill has very limited screen time but he looms over the whole film thanks to his well publicized voice talent. This is easily one of his best feature film projects yet and its great to see him score a great character outside of Luke Skywalker.

To me, Brigsby Bear is an essential watch for everyone. I'm going to go back and watch this movie for years to come. Its got a very universal concept that we can all find comfort in and it will leave you with a warm heart in the end. One of the best of 2017.