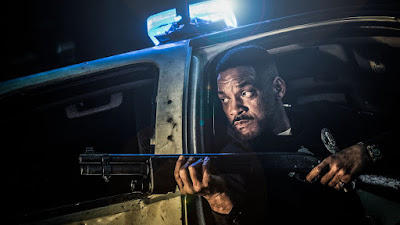 The more I think about David Ayer's Suicide Squad the more I hate it, but I would actually consider myself a fan of Ayer who has delivered some great films like End of Watch and Fury. I was just hoping that Suicide Squad would eventually be considered a misfire and he could continue to deliver quality films.

Bright is possibly the most anticipated Netflix original film to date. Screenwriter Max Landis sold the script for the film for millions and Will Smith is still a name that carries quite a bit of weight in the blockbuster world.

There is no doubt that on paper Bright has a very imaginative story. The movie is set in a universe where fantasy creatures (elves and orcs) live alongside humans. Elves tend to live wealth while the orcs live in poverty. Smith plays Darryl Ward, a veteran cop who returns to duty after being shot by an orc. Ward rejoins his partner Nick, an orc played by a completely unrecognisable Joel Edgerton. Orc policemen seem to be rare and Ward has no interest in keeping an orc as his partner.

When Ward and Nick accidently find a wand several parties begin to persue the pair in order to capture the power that the wand has. The wand gives the holder the opportunity to grant wishes but only certain organisms called Brights can actually touch the wand without being blown to bits.

I've never been a fan Max Landis. I never really quite understood why he was able to get so many scripts into production because most of the final products end up being forgettable throw away films. I do think the idea behind Bright is great. The world this movie is set in is like nothing I've ever seen before and the designs on the creatures are excellent. I do think that the film could've benefitted with some opening text just to explain the universe rather than blindly throw us into this story. Its really a fascinating mix of genres though. It has a gritty tone while balancing action, crime and fantasy.

The characters are really anything particularly special. Other reviewers have claimed the film was a buddy cop film, but I never really felt that there was enough development between the two partners to pull it off. Both of the two leads are excellent. Will Smith is attempting to resurrect the fun blockbuster Will Smith that we all love and the fact that Edgerton is able to actually perform under that much makeup is more of an achievement than most people realize. I also have a bit of respect for Edgerton to take a role of this kind because he's certainly an established actor that can do anything he wants. I found that I cared a lot more about Edgerton's character because he gets treated like shit for most of the movie.

Considering its there first shot at the blockbuster I would chalk Bright up as a success. There is some room to improve. The humor is never very invasive, but most of the jokes never really hit for me. I'm still more than willing to see another movie set in this world and hopefully the crew can create an impressive sequel. Netflix has already greenlit the second movie before the film was officially released. I'm interested.

We really have to tone Ayer down on the music though. Much like Suicide Squad it becomes a little much here.