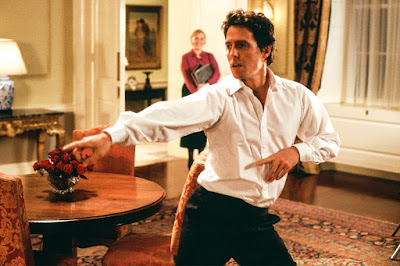 I've been meaning to approach Love Actually for quite a while now. I tried to watch it a couple of years back not realizing that it is a bit of a Christmas movie and it was about March at this time so I just put it off for the time being. I had seen one of Richard Curtis' other films About Time and I loved it. I finally checked it out last night and I will say that overall I enjoyed it, but it wasn't quite what I expected it to be.

The film is an ensemble piece dealing supposedly dealing with 8 different stories (although it feels like more than that) that intertwine slightly over the final few weeks before Christmas. All depict love in some form or fashion.

I went into this film having no real idea that it was actually rated R which is something that would never happen now. The film has several nude scenes and several utterances of "fuck." I'm not offended by it or anything. I was just taken a little off guard by it because its just something that you don't see anymore.

I do appreciate this film for attempting to balance so many different storylines, but while it makes the story original it also does some harm to the film as well. None of the relationships between any of the characters are really able to develop over the course of the film because there are so many other stories that are rushing towards conclusion. Most of the stories involved two people who share some adoration for each other that basically must overcome their fear and make their move. We aren't necessarily witnessing a lot of love in this movie, its mostly just attraction.

The cast is the main reason that I did enjoy this movie. Unfortunately in most circumstances the men stand out more than the women do. I'm sure the fact that the film is written and directed by a man contributes to this. Hugh Grant, Bill Nighy and Liam Neeson were probably the members of the cast that I felt were the standouts. Emma Thompson is really the only female character that I felt really worked and that's all the credit going to her. I enjoyed Grant, Nighy and Neeson so much mostly because of how charming they are. Grant and Nighy especially. Nighy was probably the most original character of the lot which seemed to be a bit of a parody of a burned out British pop star. Grant actually plays the Prime Minister of Britain. I've never explored Grant's film much because I always felt like his movies were more aimed at women, but I was shocked with how charming he was.

With a story that attempts to balance so many stories there were some that definitely stood out as the weaker ones. Keirra Knightly and Andrew Lincoln's story is especially bad and I'm sure that many viewers would consider the story involving Liam Neeson and his stepson is pretty stupid too. Again, Nighy's story felt like it was the most original and most natural flowing story of the lot.

I do kind of hold a bit of resentment towards this movie for reasons that aren't really its fault at all. Love Actually isn't a great film, but I will say that I enjoyed it overall, but I think you can blame a lot of the garbage that came later like Gary Marshall's Valentine's Day and New Year's Eve are heavily inspired by this movie.

If I was in search of a new Christmas classic to watch every year Love Actually won't be it. Its a simple feel good movie and I may have some problems with it, but the cast are strong enough to elevate what isn't very strong material by today's standards. As far as I can tell Love Actually didn't have sparkling reviews in the first place, but I'm sure some people are starting to notice that its grasp is starting to wear off.