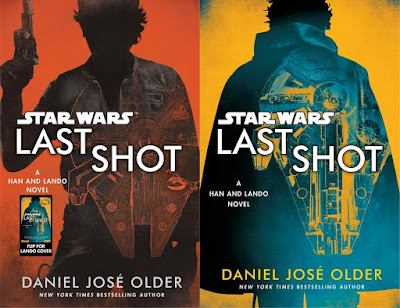 Last Shot was written by Daniel Jose Older and its his debut novel in the Star Wars galaxy. While its not part of a “journey to” series it does appear to serve as a bit of a primer for Solo: A Star Wars Story. This book focuses mostly on Han Solo and Lando Calrissian as well as their relationship together.

Its been a bit of a quiet year so far in 2018 for Star Wars novels. I’m sure the heavy reshoot process for Solo: A Star Wars Story has probably influenced the amount of tie-in fiction we’ve gotten so far. Still, Last Shot is one of two novels that will be released that should have a bit of tie in with the movie with Most Wanted coming on the day the movie is released. Last Shot is written by Daniel Jose Older in his first full novel in the Star Wars galaxy. Older did provide a short story for From a Certain Point of View.

The novel takes place primarily in 3 different eras. The bulk of the story takes place about 3 years following the conclusion of Return of the Jedi. The Battle of Jakku is a distant memory and the galaxy is at peace. Han Solo and Princess Leia have both claimed important positions in the New Republic as its still trying to gain traction and Lando Calrissian has been back at Cloud City for a couple of years. We got a glimpse at what Lando was up to after Return of the Jedi in the Aftermath series, but that was during a small interlude apart from the main story. When Lando catches wind of a problem that involves both him and Han he has no choice to but to team up with his old friend yet again to try and stay out of hot water.

Both Lando and Han seem to be struggling in a galaxy without conflict. Both of them have gotten some much needed rest in the last little bit as the war has come to an end. Han seems to struggle to connect with his 2 year old son Ben and he appears to be getting restless. Lando is possibly looking at settling down with a Twi’lek that he has feelings for, but he can’t seem to express himself. Both men seem unsure about where their future in this world is.

Seeing Han Solo struggle to relate to his son is quite interesting. Especially now that we know how his relationship with Ben ends. You can certainly tell than Han has love for him, but struggles to show it. I’m sure the storyline will be explored further in the future. Its not a very big part of this book, but an interesting one nonetheless. Han seems well aware that smuggling was his real calling and sitting at home being a father just isn’t the life for him. Getting to read about Ben Solo as a kid makes his story that much more tragic too.

The relationship with Han and Lando is one of the key elements of the book. We don’t have a lot of canon information about their “friendship” yet so this is one of the first in depth looks. I guess I was expecting more of a bromance between the two men, which is probably the direction they went in the Legends material. This book shows that they care about each other, but the lying and cheating still happens from time to time. Chewbacca even has a minimal amount of stuff to do because it almost solely Han and Lando’s story.

Older assembles a crew of new characters around Lando and Han, most notably a young hotshot pilot named Taka, who I’m sure Han sees a lot of himself in. Most of the members of crew don’t get a lot of exploration, which is fine. Among the crowd is an Ewok slicer (who would know that they were tech savvy?) and that’s a fun character too. Lando and Han are the characters that I had the most interest in and focusing on them just makes sense. L3-37 makes his first appearance although her role in the book is still a fairly small one. This just seems to be a bit of a primer for her in the film. It appears that she’ll have a far different personality than K2-S0 which was something fans were a bit worried about. In the segments where she appears Lando looks to treat her almost like a partner rather than a servant. Sana Starros, who already has some history in Star Wars canon appears in Han’s flashback too. Again, her role is limited too, but I’m sure we’ll come back to her in the future, whether its in film or writing.

The book’s villain, Fryzen Gor is fascinated with droids and the main plot of the book has a lot of involvement from droids. Gor seems to value the life of a droid more than a human. We get a bit of backstory on Gor through some flashbacks that occur a little less often than Han and Lando’s do. Gor’s motivation is limited. He seems to want to execute this plan because he’s insane and not because it makes any sense. It was still nice to have a villain that wasn’t just going back to the Imperial well all the time.

Some of Older’s writing just doesn’t really seem that well suited for Star Wars. I had a bit of a problem with some of the dialogue in the early moments. Its not really that distracting, but it was something that I picked up on. There were just a few lines that I didn’t really think these characters would usually say. Characters saying “what now?” just doesn’t seem right for a Star Wars book. There are some other examples of writing that just doesn’t feel like Star Wars if you read the book. That was really the only element of his writing that I didn’t really like. I think he had a really good grasp on the characters. It could be that Older was trying to appeal with his fans while also trying to please Star Wars fans too.

There are a lot of moments surrounding the Solo: A Star Wars Story era that are intentionally left vague. I’m sure that if you chose to read the book after the movie came out it would be a lot more obvious what was tying in to the movie. Overall I don’t think this book was anywhere near the best of the canon novels, but it was a fun read and its one of the strongest looks into Han and Lando’s relationship. Hopefully Solo will go even further.