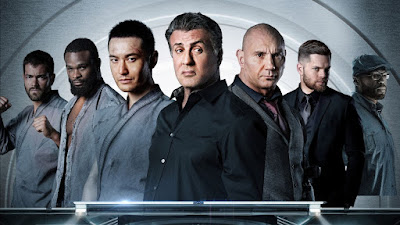 I don't really bother with straight to DVD releases. I bet I haven't watched a handful of them outside of the occasional DC animated film. Yesterday I noticed that Escape Plan 2: Hades was available on iTunes in sort of a straight to DVD/straight to VOD sort of thing. Apparently this sequel does get a release in China because the first movie performed quite well there.

The main appeal of the first Escape Plan was that it featured Sylvester Stallone and Arnold Schwarzenegger starring together. They had appeared together in The Expendables but Arnie was more of a background player in those movies. This time they were legitimate co-stars. I haven't watched the movie since it came out, but I remember at least liking it a bit. The first movie was pretty dumb, but fun enough because of the lead pair. Stallone had one of those non-existing "movie jobs" is pretty nonsensical, but whatever. I'm sure I wouldn't like it if I watched it again.

I read a review on Forbes about Hades and they said this sequel feels more like a spinoff than a sequel and in some ways I agree. Schwarzenegger is gone and the budget was cut in half. You really don't even need to have seen the film movie to watch this one. You're probably not going to understand this movie whether you've seen the first one or not. I think the only people reprising their roles from the first movie is Stallone and 50 Cent. Then Dave Bautisa is added too.

Ray Breslin (Stallone) seems like he is still operating some spin on the security business that he was a part of in the first film. I don't think for a second that a business like this really exists. One of Breslin's employees gets captured and placed in a prison called the Hades. Breslin then has to find a way to break him out. While it seems quite simple on paper I'm sure you'd find it far more incomprehensible if you're foolish enough to watch it like I did.

Thanks to the success of the first movie in China it seems like there is a lot of pandering to a Chinese audience. For a lot of the movie Stallone actually takes a back seat to Huang Xiaoming for a lot of the film until the last half hour or so. Dave Bautisa is there, but is given very little to do. Watching him team up with Stallone has potential to be fun, but they hardly spend any time together on screen.

The film is directed by Stephen C. Miller, who seems to have made a career out of straight to DVD features. He's worked with Bruce Willis 3 times in 3 years for films that are guaranteed to be sitting in the $5 bin in Walmart right now. There really isn't anything special about the action and its really the only thing that would've saved a script that is as idiotic as this one.

The film ends on a massive sequel tease and apparently a third movie is already completed, but I really couldn't care less. I can't imagine that it'll be a significant improvement. Do yourself a favor and avoid this one.