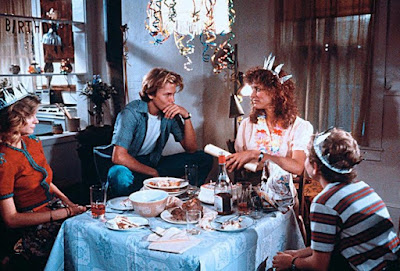 I had seen Running on Empty on several underrated lists in the few months. Probably because this year is the film's 30 anniversary. Its unfortunate how under seen this movie seems to be considering there is a lot of talent involved in it. Sidney Lumet, who had already directed 12 Angry Men, Dog Day Afternoon, Serpico and Network was at the helm for this film. Even with a lot of praise coming from some of my favorite sites I was still taken by surprise when I finally saw this movie. Its an excellent piece of work.

Running on Empty is a family drama focusing on a family that has spent about 15 years or more on the run. Annie and Arthur Pope, played by Christine Lahti and Judd Hirsch respectively, were involved in a bombing at a Napalm laboratory in 1971. The bombing ended up blinding and paralyzing a janitor who was working at the facility at the time (although the janitor was not supposed to be there) and they've been forced to run ever since. Their oldest son Danny (River Phoenix) has been following his family ever since he was 2 years old and his parents had another baby named Harry while they continued to elude the FBI. The Popes have traveled all over the country and have carried several different identities leaving whenever they think someone may be on their trail.

The premise is able to spawn characters that are unlike any that I've seen before. At the centre of it all is River Phoenix, who is able to make his character very relatable and grounded in reality. At the start of the film Danny seems to be completely content with being chased around the country by the FBI for the rest of his life. The constant moving has become a normal part of his life although neither he or his brother have really done anything wrong. They've been forced into this life because of the decisions of their parents. When Danny starts to show promise as a pianist he catches the interest of his music teacher and his daughter who give him his first glimpse of what being a normal teenager would be like. Pursuing his own dreams would potentially mean that he never gets to see his family again.

The script does a great job of humanizing the parents. Christine Lahti and Judd Hirsch may have committed their crime for political reasons, but years later politics don't really seem to be a factor. They both seem to be former hippies that lost their fire, but are unable to settle down like many of their peers.. They are still living with the consequences of their choices, but Annie and Arthur start to realize that now that their son is nearing adulthood that the life that they have chosen for him just may not be plausible for him anymore. Still, there are many moments in the film that really drive home how much the family loves each other. They have to remain guarded from the outside world so it makes sense that only they truly know each other. Their home is the only place where they can truly be themselves. They still have their lighthearted moments, one coming with a great use of James Taylor's Fire and Rain.

Lumet is able to craft a handful of great emotional scenes. Running on Empty has such a powerful story and characters that it really earns the emotional ending that won't leave a dry eye in the house. I did find that the ending was a bit abrupt after watching it play out. There are a few questions that remain up in the air, but I'm not sure that an epilogue scene would've resolved things either. After letting it marinate for a while I found myself pleased with how the film ended. Its bittersweet, and I'm sure that it feels even more bittersweet now that River Phoenix tragically passed 5 years after the release of the film. Phoenix got his only Oscar nomination for this film. A nomination that was believed to be the first of many at the time. Screenwriter Naomi Foner also got a well deserved nomination. Foner is actually the mother of Maggie and Jake Gyllenhaal.

Roger Ebert called Running on Empty one of the best films on 1988. I still have a lot of films to see from that year, but I consider it one of the best as well. I think this will be a movie that I will be coming back to soon. Unfortunately DVD is the best format that is available for the film.