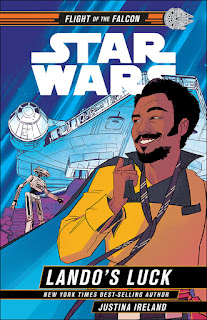 Lando's Luck is the first novel in a series of Star Wars books under the name Flight of the Falcon. Its a series that covers through young reader novels and the Star Wars Adventures comics. There was also a choose your own adventure book featuring Luke and Leia that has already been released as a part of this series as well. As expected, it will cover the history of the Millennium Falcon over the years.

Our first story belongs to Lando Calrissian and L3-37 at some point before the events of Solo: A Star Wars Story. Lando is taking part in some less than respectable business on the planet Hynestia when he is caught by the queen. He is given two options, He can be fed to a monster below the city or deliver an artifact called the Solstice Globe to the Empire. The mission seems easy enough until he discovers that the Queen's daughter has snuck her way on to the Millennium Falcon and she insists that smuggler return the globe to home world which will be destroyed without the globe. As expected, things get a bit complicated from there.

Lando's Luck is very straight forward. If you're looking for any cool new canon facts you're probably not going to find much in this book. Even the character moments are pretty limited. Writer Justina Ireland definitely knows the characters of Lando and L3-37, but they are in a pretty surface level adventure. I'm not going to criticize it for that because it appears to be intended. This book is primarily for children, but an adult can easily read it without too much catering to kids.

There are a few new characters that are introduced, but most of them aren't explored. Even the young Princess Leia-like princess that somewhat "co-stars" with Lando stays at the surface level. Rinetta Gan has some similarities to the beloved Leia, but I was just as interested in her side of the story as I was in Lando's.

In the prologue and epilogue there is a bit of a story that will likely tie in to the other media in the Flight of the Falcon series. It features Bazine Netal, who seems to be looking for information about the Falcon for some reason. I'm sure it'll be elaborated in the other media.

The book is very fast moving, or at least it felt that way to me because its a bit below my reading level. I got through it in about a couple hours of reading time. Lando's Luck does exactly what it intended and I got a light Star Wars adventure so I'm happy.