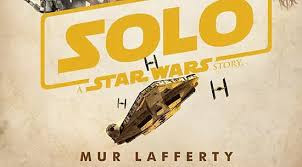 Solo: A Star Wars Story was released in theaters back in May and it looks like the story behind the disappointing box office is just starting to die down. I honestly felt like most people who chose to see the movie enjoyed it quite a bit. It doesn't have the backlash that The Last Jedi had, but people just weren't that interested I guess. Now we've gotten the story of the film in novel form. This time its written by newcomer Mur Lafferty.

The Star Wars novelizations have always been a bit of a source of confusion in Star Wars canon. They tend to be based on early drafts of the script so there are scenes in the novel that end up being deleted from the final film. There is always a bit of a gray area surrounding what is actually canon and what isn't. Much like the adaptation for The Last Jedi this novel is being promoted as an expanded edition. This is the third Star Wars novelization I've read since the Disney purchase. I've read both The Force Awakens and The Last Jedi (the better book of the two). I did read about half of the Rogue One book, but something else came out and I began to read that instead. I enjoy reading these books, because the interior monologue of the characters helps to build on the enjoyment of the film later, also the deleted scenes still can work in a book while they may throw pacing off a bit in a movie.

So I'm sure that if you are reading this you've probably seen Solo, but if you haven't its probably safe to say that there may be a few spoilers from here. You may not want to read on.

Lafferty is able to provide some fresh perspectives in this novel. Solo was a film with a lot of characters, but the movie really belongs to Han Solo. I was happy to see that we got to read what was going on inside the heads of characters like Qi'ra and Beckett because I really loved those characters too. Val even gets a nice little moment although we know that she doesn't really stick around long. Most of the characters in the movie are there to shape Han Solo so this gave me a different look into some characters that I already loved. L3-37 was one of the only characters in the film that I didn't really care for, but I was glad see inside her head a bit in this novel. I don't know if it completely repairs some of the issues that I had with the character, but there is one short passage that is actually one of my favorite pieces of the whole book. L3 was probably the character that benefitted the most from this adaptation. Lafferty makes some insights about her that I didn't think about very much during the film. She gives us a glimpse into what L3 is like once she becomes forever bound to the Falcon. Lando and L3 share a cool moment close to the end of the book after L3 has died, but she finds a way to communicate with Lando through the Falcon.

Beckett and Qi'ra both sort of betrayed Han in their own little ways in the film. The novel makes a bit more of an effort to explain their motivations. It showed their humanity a bit more. Qi'ra especially, but the loss of Rio and Val sticks with Beckett more than it is shown in the film and I thought that was a nice touch.

The reveal of Enfys Nest being a rebel was a cool moment in the film and I was gald to see that she gets elaborated further in this book thanks to great final epilogue. Enfys meets up with Saw Gerrera and a young Jyn Erso. I don't think this moment maybe would've made sense in the movie, but its a nice ending to the story. Eventually all these small uprisings of people are going to come together and form one big rebellion.

Like most novelizations this is a pretty quick and easy read if you're already familiar with the film. Its been a while since I've seen the movie so I actually wondered occasionally if I was reading a scene that was deleted from the movie or just a scene that I had forgotten about.

The novel has a very similar tone to the film. Very quick and very fun. I didn't exactly speed through reading it because I was trying to pace myself until the release of Lando's Luck. I liked the film a lot, I like the novel a lot. I didn't like it as much as Jason Fry's adaptation of The Last Jedi, but I prefer this to the novelization of The Force Awakens.