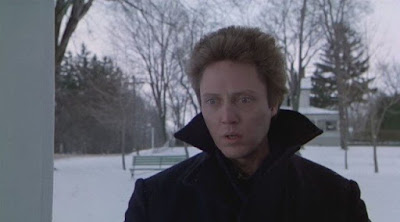 Legendary director David Croenenberg adapted a Stephen King novel. The Dead Zone came when the first era of Stephen King adaptation seemed to be getting more and more present each year. I've had this movie saved on my PVR for about a year since it aired on AMC during the Fear Fest and last night was the night I finally decided to check it out.

The Dead Zone is an adaptation of Stephen King's 5th novel (or at least the 5th written under his own name). It was one of three King novels that was adapted into a movie in 1983 alone (the other two were Cujo and Christine). The story of The Dead Zone revolves around a man named Johnny Smith (boring name eh?) who gets in a car accident that leaves him in a coma. He doesn't wake up from his coma until 5 years later. His girlfriend has moved on and gotten married to another man and he soon realizes that he has acquired some psychic abilities. He has visions whenever he comes into physical contact with another person. It could be of their past present or future.

I've never read the novel, and one thing this movie succeeds at doing is making me more intrigued by this story. If I'm able to work down my long list of novels to read I may eventually get to check out King's novel. I don't know how loyally the script follows the book, but I was surprised with how unfocused this movie is. It seems almost like an anthology of stories featuring the same character.

Christopher Walken is in the lead role and is really the only character that has a consistent presence in the film. There is plenty of talent involved, but most of the other actors disappear for long periods or disappear entirely. Walken is certainly well cast and he's able to bring the intensity that the character deserved. Walken and Croeneberg are able to portray Smith's abilities in a grounded manor even if they are far from realistic. He was able to overcome a few ethical dilemmas through the movie, although they don't really dwell on it.

I'm still relatively new to Croenenberg, but after watching some of his other films like Videodrome, Scanners, The Fly and The Brood this effort seems a bit more mild. I was looking to be more effected by this film than I was. I'm sure the fact that Croenenberg only directed the film and didn't write the script may contribute to this as well.

The film is almost broken into sections. The first third is where we are introduced to Johnny Smith and his abilities, the second third is where he helps the cops track down a serial killer that has been terrorizing the town and then finally he becomes aware of the future that lays ahead when he touches the hand of a man who is running for senator and has to decide whether to intervene or not. I felt that the film would have been stronger if the script stayed a bit more loyal to one of these stories rather than trying to devote a reasonable amount of time to each.

Of the supporting cast Martin Sheen's politician character was the one I had the most interest in and not really because the performance is really that good. He's a little overcooked, but that at least made him fun to watch. Brooke Adams plays Smith's old girlfriend, and I never felt like that relationship was really evolved that well. The only relationship that I find really works is Smith's relationship with his doctor played by Herbert Lom. The doctor makes an effort to comprehend Smith's abilities and offers support rather than dismissing what he's able to do.

If you're not familiar with Croenenberg this may be a good place to start with him. Its no where near his best effort as a director, but its a good introduction into who he is as a filmmaker. It could've been that he was still busy putting everything he had into Videodrome that came out the same year.