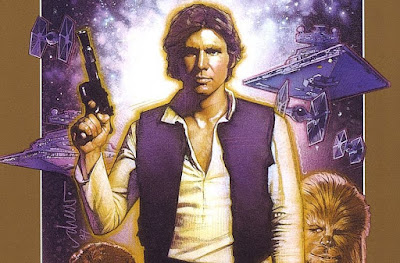 A.C Crispin wrapped up her Han Solo trilogy with Rebel Dawn. The story is the final chapter in Han Solo's life prior to meeting Luke Skywalker and Obi-Wan Kenobi on Tatooine. It follows the books The Paradise Snare and The Hutt Gambit which I have already reviewed earlier this year.

The book picks up almost immediately where The Hutt Gambit left off. The smugglers were able to defend the "Smuggler's Moon" of Nar Shaddaa from an attack by the Empire and Han Solo heads to Cloud City in order to take place in a Sabaac tournament with a pull that has the power to change his fortune.

Since its included on the back of the book you can probably expect that Han will win the Millennium Falcon from his pal Lando Calrissian in this story and he does quite early in the book. The EU version of the story is a bit different than the one we saw in Solo: A Star Wars Story as it doesn't really offer many surprises to the story, which is fine.

It does take a little while for the thick of the plot to really get underway. The stakes don't really get high until about the last 100-150 pages. Han and Chewie spend some fairly uneventfull time on Chewie's home world of Kashyyyk. Han meets up with his old girlfriend Bria Tharen who is now a commander in the newly formed Rebel Alliance. With help from the Hutts Bria is planning an attack on the spice planet of Ylesia where many slaves are being held and she needs some experienced pilots, including Han to help her out. Of course, the drama between the Hutt clans resumes after the last novel as well since Jabba and Jilac paid to kill a rival Hutt.

Rebel Dawn is where the Han Solo trilogy reaches its peak. There are so many characters in this series now that its not really all Han's story. I'm sure one of the complaints about this book is that Han may actually be a bit underserved himself, but for me I was able to forgive that because there are some other storylines revolving around other characters that reach their boiling point. There is also some effort made to accommodate Brian Daley's original Han Solo Adventures although it causes Han and Chewie to be absent for a large gap in the book.

Han's relationship with Jabba the Hutt is one of the more interesting parts about Han's story. It really ties in nicely with their little scene from the special editions of A New Hope. Their alliance is always on the verge of exploding, but they have some respect for each other.

Another character who gets some interesting exploration is Boba Fett. He appeared a bit in The Hutt Gambit, but its in this book where he get displayed as more of a badass. He and Han interact a bit so we start to see hints of a rivalry between the two of them. Boba also shows a bit of a moral code that I didn't expect to see from him.

After a much smaller role in The Hutt Gambit Bria Tharen could possibly be considered the main character of this book and for good reason. She's probably the strongest character in the book. Over the course of 3 novels she's gone from a junkie to a Rebel leader. Joining the Rebellion seems to be the only way she could deal with her addiction and now the alliance has her loyalty until Han reenters the picture. She could be compared to Rogue One's Cassian Andor in some ways. She has been admiring Han from afar but a new mission brings them together once again and she find herself torn between the love of her life and the newly formed Rebel Alliance that she has given everything for.

The book unsurprisingly leads directly into Han Solo's meeting with Luke Skywalker and Obi Wan Kenobi in Mos Eisley. So, in order to get there some fairly predictable things have to happen in order for Han to be the person he is in A New Hope. Even without many surprises I felt that Crispin always had me on board with the direction of the story. There are a few important things that get stuffed in the back end of the book which was unfortunate, but all the bases were covered. There are just some elements of this story that had her painted into the corner and she did the best with what she had.

When all is said and done the Han Solo trilogy was a very entertaining ride and I felt it ended on a high note and it really took us far. If you're a Star Wars reader and you want to see an alternate version of Han Solo's backstory this is an interesting story to explore.