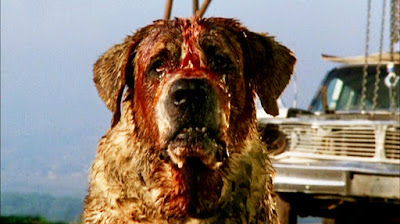 I watched Cujo for the first time shortly after I finished reading the novel. Its one of the only classic era Stephen King books I've read. The only other two I can think of off the top of my head are IT and The Shining. I didn't really care for the movie, but that said I hardly felt like Cujo was among the most memorable King books either. King has even admitted that he wrote the movie while on cocaine and hardly remembers writing it at all.

The film adaptation comes just 2 years after the book. The film focuses on the Trenton family, who is terrorized by a rabid dog. Donna Trenton (Dee Wallace) and her son Tad find themselves stuck in a car while the dog eagerly awaits to attack them.

Dee Wallace is the top billed performer in the movie and easily the most memorable performance in the film. She is a mother and wife who is having a secret affair with "the local stud". Daniel Hugh Kelly is a character I can feel some sympathy for because he doesn't really seem like a guy who deserves to be cheated on. Their young boy Tad even gives a pretty solid acting performance considering he was only 7 years old when the movie came out. The family drama does take a large part of the movie and its hard not to get a little bored with the movie at times. Its takes nearly an hour before the standoff in the car really begins.

Cujo may be based on a book, but you can't really feel like its a later day Jaws ripoff in certain respects, still the film does a pretty good job of making a Saint Bernard scary. He gets more and more vicious with each scene. Any animal lover can't help but feel bad for the poor dog either since its obviously not his fault he's acting this way. The film kicks off with Cujo getting the bat bite where he contracts rabies, and its a very innocent little moment that you could think could happen to any animal. I think what many consider so horrifying about Cujo is that it depicts a logical thing that could realistic happen. Although I'll admit I've never seen a dog with rabies so I have no idea how they act.

Although Dee Wallace's character is adulterous, cheating on a man who seemingly doesn't deserve it. You can't help but root for her when she and her son become stranded in the car. Wallace shows her character's desperation to survive at all costs. The moments when Cujo begins to attack the car made me far more anxious this time around than they did with the first watch. Plus the heat and/or starvation get to become a factor as well.

For as much as I can remember the book, which is not very much , I'd say this movie stays quite close to the original story. Although Stephen King made a very bold choice with the ending and this film adaptation was far too scared to try and pull that off. It was probably for the best considering how brutal that would be to see.