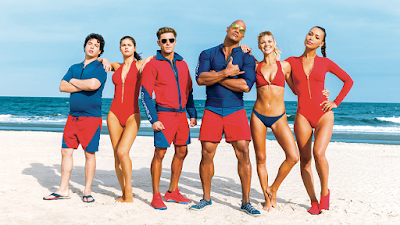 I was never a fan of the original Baywatch tv show. Its was one of those phenomenon that was just slightly ahead of my time but when I heard that the Rock was producing a film adaptation of the movie I felt like there was some potential for a fun franchise. I will admit that Baywatch is a fun watch. I was entertained through the whole lengthy 2 hour runtime, but its heavily flawed and its a shame because I don't think its as far away from being good as people think.

This Baywatch adaptation owes a lot to Phil Lord and Chris Miller's 21 Jump Street series because it makes an attempt to turn the show into a parody of itself. Its a film that knows how ridiculous it is and it does make some attempts to poke fun at itself but the humor is so on the nose that it just doesn't work. The humor is the main reason that this film would be considered a failure. Not many jokes hit. Especially the Rock's constant nicknaming of Zac Efron's character which seemed like the cheapest "Adam Sandler" like humor I've seen in a while.

The Rock is playing the hero that we expect as Mitch (the character played by David Hasselhoff in the show). The film kicks off with this wild action scene where he is forced to save a swimmer with lots of the series famous slo-mo in tact. Mitch takes his job a little too seriously despite only being responsible for such a small area and they could've played that for a lot more jokes that they did. Zac Efron's character is the only one in the film that gets any real character arc as he starts out as a cocky former swimmer who feels entitled to a spot on the team. He and The Rock have a simple buddy-cop dynamic similar to Riggs and Murtaugh and the chemistry between the pair is there. Its just that their jokes don't work.

The Baywatch crew are still pretty fun to watch and I found myself liking the characters. I've seen lots of complaints about Jon Bass' character Ronnie who is forced to handle a lot of the jokes. His humor may not of hit because I still enjoyed him because of how pathetic he was. He just seems to be one of those characters that you just have to feel bad for. Alexandra Daddario and Kelly Rohrbach play the eye candy members of the crew and they are talented and likeable enough that they really deserve more than that and they end up being not much more than love interests for some of the other characters.

The first half of the movie is really the only part that takes place on the beach and the second half is where Baywatch really starts to get off the rails when the crew get involved in some possible drug trafficking that is going on around their beach and the cops refuse to do anything about it. The lifeguards get caught up in the situation when its really not any of their business. Efron makes some attempts to parody it but isn't enough of an excuse for the audience to forget how stupid it is. Quantico's Priyanka Chopra plays the main villain and for some reason she sees the lifeguards as a threat when they really shouldn't be. It just seemed like the whole crime plot didn't really need to be there because a film named Baywatch should really be about the beach in the first place.

I feel that Seth Gordon (Horrible Bosses) could've made a good film under the Baywatch name and the cast do him a big favor but unfortunately the script does not. The unfocused story keeps this entertaining but stupid ride from really earning its wings. If you are a fan of the cast you'll probably see a little value in Baywatch but there is still some room to grow.