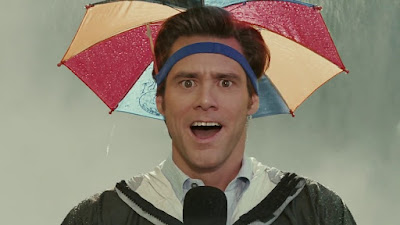 Few actors can elevate inferior material in the way that Jim Carrey does. Its hard to imagine characters like Ace Ventura and Lloyd Christmas without Carrey behind them. His ability to create wild characters comes so naturally to him that he makes it look easy. Ace Ventura especially would be absolutely nothing without him. Ace Ventura and Liar Liar director Tom Shayac teams up with Carrey again here in Bruce Almighty.

Carrey plays Bruce, a newscaster who consistently blames God for his struggles is summoned by God himself and is given God's power. In the process he learns how difficult God's duty really is.

I've seen this movie a few times on cable since its release but I wasn't sure that I had ever seen the beginning of the film. I noticed that this film doesn't really kick off that well. Carrey's character has a fairly solid life but he is constantly blaming God for his own inability and I really didn't think that was good character work, but when Carrey meets God, who is played by Morgan Freeman and he is given his powers the film starts to take off and they start to abandon that trait.

I think using this premise for a project is pretty ambitious but it only covers the tip of the iceberg. It is a comedy though and it does bring the laughs pretty consistently. Carrey goes around his Buffalo neighbour testing the boundaries of his powers like most of us would do if we were granted those abilities and most of his antics spawn a lot of laughter. He abuses the powers to allow him to rise up at his job and sabotage his rivals, including one played by Steve Carell who is used for a lot of pretty funny gags. Then when the weight of the world starts to apply pressure he starts to notice that it takes a lot more to be God.

Carrey plays the over the top character that people often associate him with. Bruce really isn't that great of a person but I think he becomes likeable because of Carrey. I love that Morgan Freeman was chosen to play God and he has such a great presence when he's on screen that I can completely buy the role. Jennifer Aniston plays Bruce's girlfriend Grace who unknowingly reaps the rewards of Bruce's new strength. Aniston was still at the peak of her beauty and still riding high on Friends so she plays the likeable girl that we all love. The romantic subplot starts to take over the film towards the end and it ends pretty predictably but its what I wanted to see happen anyway.

Bruce Almighty has a pretty solid message and it may not cover as much ground as I hope it would but it still has good intentions. I'll surely watch this film again further down the road because at the end of the day its watchable and its harmless.