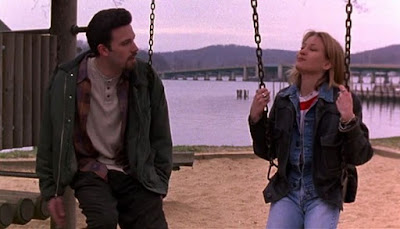 Kevin Smith's Chasing Amy could've easily been a disaster. Chasing Amy is the equivalent of having your favorite punk rock band release their first "mature" album after years of angst. Smith became the calling card of Generation X thanks to his first film Clerks. Chasing Amy is his third film and Smith was forced into a smaller budget for the film because of the box office failure of his second film Mallrats (now a cult classic) and his attempts to make all the castings himself. Mirmax wanted to cast more recogisable Hollywood faces and make the film for 3 million dollars but Smith insisted that he wrote the script for the film with his friends Ben Affleck, Jason Lee and then girlfriend Joey Lauren Adams in mind, all three star had originally appeared in Mallrats.

Chasing Amy has a far more serious premise than anything Smith had done to this point. Affleck plays a young comic artist named Holden McNeil who created a comic called Bluntman and Chronic (a reference to Smith's characters Jay and Silent Bob) with his partner and inker Banky Edwards (Jason Lee). Holden meets fellow artist Alyssa Jones who he becomes obsessed with until he catches word that Alyssa is gay.

Holden McNeil is easily one of Ben Affleck's best roles. I'm sure that the character has some personal notes and that Smith intended for the character to be himself in some ways but Affleck really plays the role perfectly. Holden is a painfully naïve character that can easily be considered insensitive just because he is so oblivious to the world of a lesbian. Holden's heart always seems to be in the right place but his inexperience seems to be his downfall.

Joey Lauren Adams never seemed to really get the opportunity to shine like she did in Chasing Amy. Alyssa is a fun character but she also gives the audience a different way at looking at things. Especially to heterosexual males. Smith's brilliant dialogue helps the performance a lot and the scenes that Affleck and Adams share are the highlight of the film.

Jason Lee plays a comedic relief that becomes more of a key player in the story than expected. Lee's character Banky comes off as unintentionally homophobic. Lee and Affleck make great onscreen friends and even though they fight you can see that both friends are just looking out for each other.

Chasing Amy has a story that could be considered ahead of its time and I would say that its more appreciated now than it ever was. Holden's inability to understand women has made him a character that most young males can see themselves in. He's originally quite confident that there is a spark between him and Alyssa but once he finds out that she's a lesbian he isn't really sure what his next step should be. Holden makes a lot of dumb decisions in the film because he just never quite knows how to properly deal with anything. He wears his immaturity on his sleeve and maybe the film suffers a little bit because of that but I feel that its what makes it quite special to me.

Chasing Amy is a risk that Kevin Smith should've taken more in his career. Its composed of so many great scenes with great dialogue but Smith's writing feels like it limits it almost as much as he helps it thrive. It some ways I feel like its the forgotten film among Smith's View Askewniverse as the films that came after it seem to get more attention from fans which is a shame because I think Chasing Amy belongs in the conversation about his best film ever. I just can't say its as good as Clerks.