Jedi of the Republic: Mace Windu #1 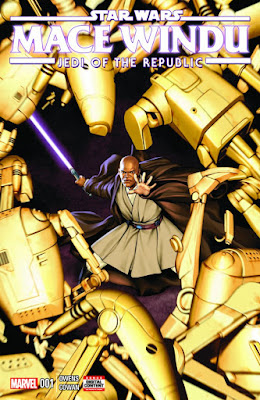 Mace Windu became a more beloved character than George Lucas' writing of the character probably deserved. Samuel L. Jackson playing the character is basically what made him so memorable in the first place. Windu is a character still has a lot of mystery surrounding him in the new canon and now Lucasfilm has decided to explore the character more in his own comic miniseries.

The comic takes place in the heat of the Clone War when Mace Windu was forced to become a General much like most of his Jedi allies. Mace appears to be skeptical of the Jedi's role in the Clone Wars but also feels that they must be involved in some way. He said "sometimes you have to be in a sword instead of a shield". Windu was forced to see many Jedi die during the Battle of Geonosis and hopes to avoid any other deaths on his watch.

Windu is sent on a mission to the planet Hissrich without the backup of a Clone Army in order to spy on the Separatists who have been appearing on the planet. Windu teams up with Kit Fisto, the blind Prosset Dibs and Rissa Mano. Windu's pairing with Fisto makes sense and Windu explains his respect for his ability especially with a lightsaber. It makes sense why Windu brought Fisto with him when he made an attempt to arrest Palpatine in Episode III.

This issue shows Windu as a very capable leader even though he may not believe in the cause 100%. His fellow Jedi also find themselves questioning their role in the conflict and he tries to set them on the right track as Yoda did for him earlier in the book. Dibs in particular struggles with his place in the war they find themselves forced into.

Mace Windu's comic gives us a good look into the prequel era that only a few have explored so far. I'm sure any fan of The Clone Wars series will find this to be an essential read.