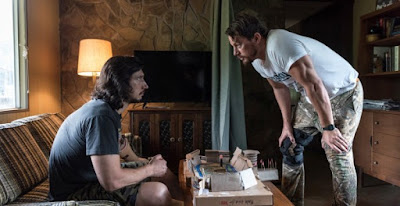 Steven Soderbergh has decided to come out of retirement in order to give us Logan Lucky. The heist storyline is one he’s very familiar with as director of the Ocean’s trilogy, but Logan Lucky changes things up quite a bit by adding the quirky characters and comedy that feel more like a Coen brothers film.

The film basically revolves most around two families, the Logan family and the Bang family. The Logan’s (Channing Tatum, Adam Driver and Riley Keough) have been hit with so much bad luck over the years that they start to feel that they are cursed. Jimmy Logan (Tatum) was a promising football star before an injured leg ruined all chances of an NFL career and his brother Clyde (Adam Driver) lost his forearm and hand while in Iraq. Now he’s forced to wear a plastic arm as a replacement. Jimmy is fired from his job and acquires some inside information about the  money at the racetrack in Charlotte. Jimmy, Clyde and their sister Mellie (Keough) decide to use that information to plan a heist. In order to crack the racetrack’s vault they need help from Joe Bang. A safe cracker who just happens to be in jail.

I really enjoyed this movie. Its not just a hillbilly version of Oceans 11 (Oceans 7/11). Its one of the most fun films I’ve seen so far this year and I think its definitely worth seeing during its theatrical run. The characters are so fun and well preformed that is so easy to get addicted to this story. Soderbergh does well enough to get the audience on board with the characters. Tatum is the leading man and he’s the character that gets the most exploration but the Logans are loveable losers. Especially Adam Driver who is hilariously slow and dry as Clyde. I’m thinking that this may be the best I’ve ever seen him. The brothers are simple but they prove to be a little smarter than expected.
As soon as I saw the trailer I was looking forward to seeing Daniel Craig as Joe Bang. The character is wild and unlike anything I’ve seen from Craig to this point. Joe Bang doesn’t get a lot of exploration as a character but he’s good for some great laughs and his brothers (one of which is played by Dennis Quaid’s son Jack) make fine additions to the ensemble too.

I haven’t seen any of the Ocean’s movies in a long time but I’m sure fans of those films will be able to find some similarities in these Soderbergh projects. The heist is brilliantly planned and makes for a very fun watch. The film ends in way that seems like it could be open for a sequel. Which I’m kind of on the fence about. I really loved this film but I’m not sure that we really need to see more. Considering there are already 3 Oceans films and a female reboot on the way we have our fair share of heist films.

Logan Lucky is a great use of 2 hours at the movies with absolutely no fat on the bone.