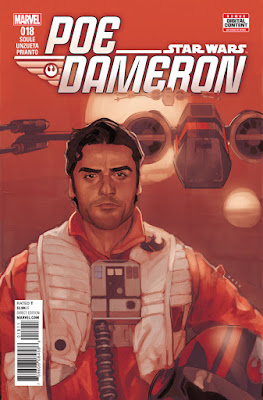 Poe Dameron kicked off a new story in the last issue with Sura (a character introduced several issues ago) joining Poe's team for a mission. Poe himself and Snap Wexley have left on their own mission to try and track down Oddy Muva who betrayed the Resistence and the First Order in order to be reunited with his wife.

Poe and Snap meet Oddy's wife having no idea that the First Order has already captured Oddy and hope to draw out more information about the Resistance. Poe and Snap want to bring him in and give him a fair trial even after Oddy's wife tries to explain his motives.

In both missions the characters find themselves in a bit of a moral dilemma. Poe must decide if Oddy is really innocent and man deciding to save his wife is really a criminal of the Resistance and Jess and Sura may have to sacrifice their propaganda in order to save a species and a planet. Even if the propaganda will possibly convert billions of followers.

Snap and Poe find themselves on different sides of the coin regarding Oddy's innocence. Snap feels that Oddy should pay as L'ulo died because of his betrayal. The issue puts Black Squadron in a tough spot. Just about in the First Order's reach. This issue continues to deliver on the consistency that Charles Soule has introduced over the last year.