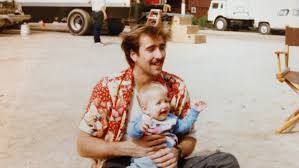 I'm really not as caught up on the Coen Brother's film catalogue as I should be, but I still have a lot of respect for her. Watching any of their films for the first time is an event and that's why I tend to put off watching them in order to preserve my reactions.

Raising Arizona is probably not the best Coen movie but man I love it. It has most of the elements that they have made themselves famous for. Nick Cage and Holly Hunter are both amazing as the famous quirky Coen characters. Cage plays H.I, an ex-con who falls for a cop (Ed) played by Hunter and they get married and hope to start their lives together by having a baby. Ed finds out she is barren and the pair aren't eligible for adoption. Then they hear of a set of quintuplets is born into a reach family feeling "they have more than they can handle" they decide to steal one of the babies for themselves.

From the moment the movie starts I was able to find myself latching on to Cage and Hunter. The film opens with Cage going in and out of prison and he still remains likeable because he doesn't seem to be a bad person. Its just all he knows. H.I is easily one of Cage's best performances. Its really a shame that he doesn't get high quality roles like this anymore because I bet he could turn some heads with a role with an A list director.

The Coen brothers are known for their comedies but I think Raising Arizona is one of their more traditional comedies. Most of the characters provide some good jokes whether its from their quirks or their stupidity. John Goodman provides a lot of humor in his supporting role.

There is one great robbery and chase scene in this film that is truly cinematic gold. The camera ends up following the characters as they run through grocery stores and peoples houses. The fight starts over the baby shortly after that and this movie is just so fun overall thanks to these outlandish characters. It isn't long at all at a bit over 90 minutes and its one of the best ways to spend 90 minutes that you'll never forget. Check this out if you haven't already.