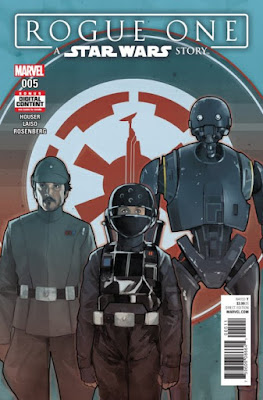 The adaptation of Rogue One continues with Jody Houser writing and Emilio Laiso as artist. Once again I am pleased.

I will give credit where credit is due. I've really enjoyed this Rogue One adaptation. The comic that adapted The Force Awakens (by Aftermath writer Chuck Wendig) kept my expectations low because there wasn't any new information but the Rogue One characters do get some exploration this time. I would say that there is more than we got in the final film. The only thing I have a bit of an issue with is the art because the characters don't necessarily look like they did in the movie.

The issue starts when the group of Rebels including Jyn Erso have just stolen the Imperial Shuttle they stole in the last issue and Admiral Raddus has just been informed (a scene that wasn't in the film).It then covers the first half of the Battle of Scarif. There are some good conversations that add a lot more information to the characters. Jyn talks with Chirrut Imwe and we learn why he and Baze were motivated to join the assault on Scariff. I liked both of the characters quite a bit in the film but they didn't have any backstory at all.

The rest of the issue play out much like the film does but because of the minor changes. K2-S0 and Bodhi have another exchange. Of the whole group of characters in Rogue One I thought Bodhi had the most potential. He got a bit more coverage in the novel adaptation as well. I just wish I could've seen it play out on film. I feel that this adaptation has become essential reading. If you want to learn more about the characters that were somewhat short changed in the movie you should be reading this comic which will conclude with issue 6 on September 6th.