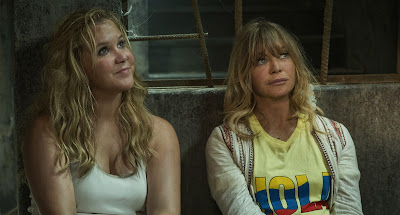 Amy Schumer is one of the more recognizable faces in the comedy world today. I'm not a huge fan of her personally but you can't doubt her popularity especially with women. I didn't think that Trainwreck was the homerun that some people did but I did enjoy it. I was shocked that her breakout role in Trainwreck didn't start a run of film roles because Snatched is her first leading role in nearly two years.

What immediately sets Snatched back a step is the fact that Schumer didn't write it. Katie Dippold, the writer of the Ghostbusters remake and The Heat gets the sole writing credit. Jonathan Levine directs and that gave me some faith. Levine had a great run of solid comedies with 50/50, Warm Bodies and The Night Before all coming one after the other, but its easy to say that this is the worst Levine film I've seen.

Snatch does start with some solid jokes. Amy Schumer is obviously playing Amy Schumer which is fine at first because the jokes hit. The whole first act is fairly funny, but from the moment Schumer and Goldie Hawn get "snatched" everything goes down the toilet. Snatched has a fairly healthy budget at 42 million bucks (slightly larger than Trainwreck) but once the mother and daughter pair start wandering through the jungle the sets start to look like they are out of an old B-movie from the 50s. There was no effort made to make the designs realistic.

The best part of the movie is definitely Goldie Hawn who plays Schumer's uptight and over protective mother. Its Hawn's first role since 2002 and Snatched showed me how much I missed her. I read somewhere that Amy Schumer threatened to leave the film if Hawn wasn't cast and that was a smart move on her part. I completely bought in to their relationship. They even look like they could be related.

The final two acts start to lose the sense of humor. During Schumer and Hawn's adventure they run into a few wild characters including Joan Cusack, Wanda Sykes and Christopher Meloni. I can honestly say that all three characters provide more laughs than the two stars do. Then you have Ike Barinholtz playing Schumer spoiled and useless brother. I found myself really laughing at his scenes but he only pops up in 4 or 5 scenes. The film would've benefitted from giving him more screen time.

When all is said and I done I must say I was a little disappointed with Snatched. The chemistry between the leads is good and the first act is good but everything gets messy quickly. Amy Schumer claims that she has a film in the works with her friend Jennifer Lawrence so hopefully we see that someday soon.