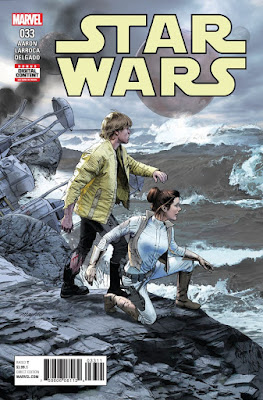 Luke and Leia become deserted on an island planet in Star Wars #33 written by Jason Aaron and drawn by Salvador Larroca. This is the first issue of the Star Wars line since the end of the Screaming Citadel crossover with the Doctor Aphra comic. I enjoyed the crossover to a point but I'm glad the series have gone their separate ways again.

Luke and Leia were on a supply run but when things go wrong they are forced to land on a planet almost entirely covered by water. Luke is able to land on a small island but thanks to a cloud hovering above them they are unable to communicate with the rest of the rebellion. Issue 33 is the first of 3 unrelated one-shots with Lando and Sana getting some attention in the next issue.

Leia is the focus of the comic. The whole book is told from her perspective. There are some great character moments here between her and Luke where they get to compare their respective childhoods and they learn that they may not be as different as they seem. They had both been orphaned by the Empire and neither were necessarily very happy with their family life in the first place. They talk about Alderaan and Leia's struggles to let go of the event. The twins still obviously have no idea that they are brother and sister but Aaron shows that the blood bond is there before Leia senses Luke at the end of Empire Strikes Back.

This whole story plays out in one issue and for the most part I really enjoyed it because of those great character moments. It does end a little sharply. I almost felt like this issue could've been even better if the battle took place in a second issue. I'm still not a fan of Larroca's art unfortunately. The faces still look like their copied right out of the films and I wish he would drop that element because the art is great besides that. I really look forward to the Lando and Sana issue coming soon. I think this is the first time that Lando has appeared in the Star Wars line. He obviously got his own solo book over a year ago.