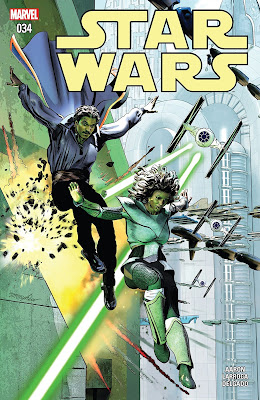 The last issue of the Star Wars line got me back on board after I found myself disappointed with the Yoda story and the Screaming Citadel crossover. Jason Aaron is having his last hurrah on this comic for the time being as he is going to be replaced fairly soon by Darth Vader and Doctor Aphra writer Kieron Gillen.

This comic star Sana Starros (who has made a name for herself because of his connection to Han Solo) and Lando Calrissian and this comic technically takes places before we meet him for the first time in Empire Strikes Back. Its heavily implied that Sana and Lando also have a history together (maybe it will be explored deeper in the Han Solo film).

There are some lines in this comic that hit home the fact that Lando is certainly the character that betrayed Han Solo in Empire. He is in it for the profit and the Rebel hero he becomes is still pretty far away. Sana sells some guns to some alien creatures, guns that happen to belong to the Empire. Sana then sells out and charges the Empire for the information on how to get their guns back and who stole them.

Sana is definitely the star of this issue. I've been waiting for a while for her to blossom into a stronger character and now she's starting to evolve into someone who is actually worth reading about. She's clever and she isn't afraid to burn anyone in her tracks to get what she wants. She continues to profit off the stupidity of her business partners. Lando plays the straight man which is hard to believe. However, the book concludes and its revealed that Sana may have a bit more of a heart than she is letting on. The next comic will be another "one and done" story with Han and Chewbacca.