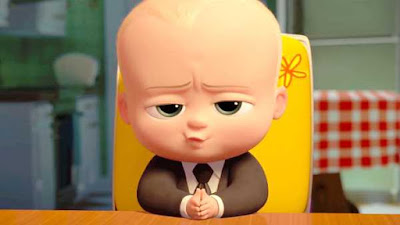 I had already adjusted my expectations for The Boss Baby from the moment I saw the trailer. The premise really did seem as ridiculous as the title made it sound. A baby who is literally the boss sounds like a recipe for disaster and I was bracing for one of the worst animated movies of the year. Surprisingly I found The Boss Baby to be quite watchable, after a little while anyway.

DreamWorks animation veteran Tom McGrath is at the helm for The Boss Baby. His earlier projects include the Madagascar trilogy and Megamind, all for DreamWorks. The story is based on a picture book released in 2010 written by Marla Frazee and ot tells the story of an imaginative 7 and a half year old boy who meets his match when a new baby enters his home and begins stealing all the attention from his parents. The boy becomes suspicious of the baby early on and quickly discovers that the baby is a secret agent working for a company called Babycorp. The baby's mission is to get further information regarding a plot from another company called Puppy co. that hopes to steal all the love from babies. If that felt complicated to you it'll probably feel even more so when you watch the film. The opening act really made me question if this movie was really even suitable for kids because it was so complicated but I will admit that I would've likely eaten this up as a kid. I guess most kids just like anything that's animated.

Tim and the Boss Baby have a relationship very similar to Woody and Buzz Lightyear in the first Toy Story. Tim is jealous of the baby and wants to get rid of him by any means necessary, but the pair grow to like each other and end up making a pretty good team. Secret Life of Pets sort of stole the same story line last year too.

Due to that wild plot The Boss Baby really doesn't get off to a good start, but I could feel the film starting to win me over as I watched. The story is so odd that it really only exists for the sole reason to make you laugh and I'll admit that it does it pretty well. The jokes have a good success rate and the characters are likeable enough that story develops some heart. I have to compliment the animation as well which is beautiful. Especially during some of Tim's imagination/day dream sequences.

Alec Baldwin is the stand out of the voice cast as the ridiculous, but still cute and loveable titular baby. A lot of the humor relies on his delivery and he steps up to the plate and gets it done. The baby and Tim (played by Miles Bakshi) develop pretty well over the course of the film and I really did like both characters but the familiarity of the story they were in was pretty obvious. The baby also has an ensemble of babies that follow it around in order to serve as some comedic relief and they were good for some solid laughs. Lisa Kudrow, Jimmy Kimmel and Steve Busemi round out a fairly talented voice cast. Tobey Maguire also jumps in and out as the narrator, who is a grown Tim.

Overall, The Boss Baby starts off with a messy start and ends fairly predictably but good characters and good laughs may be enough to make it worth watching. Its no candidate for animated feature of the year, but its certainly not a waste of time.