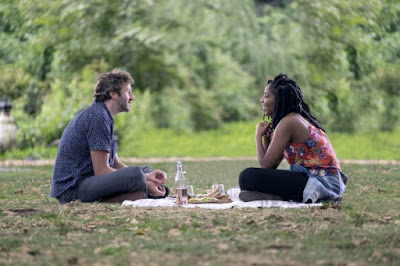 I tend to eat up these Netflix originals pretty quick after they come out. There is something awesome about checking out a brand new film opening day in your own living room. There are so many shows and films coming out on the platform every week that every once and a while there are some that go under my radar. I decided to check out The Incredible Jessica James after hearing some good stuff about it online.

Jessica James, played by The Daily Show's Jessica Williams is a playwright that is still extremely bitter about a break-up when she starts to spend time with a divorced man (Chris O'Dowd). Together they decide to stop following their exes social media accounts and they begin to bond their past romances.

I don't watch The Daily Show so I'm really not that familiar with Jessica Williams but I'm certainly aware of her now. In the opening minutes I was a little worried that I wasn't going to like her, but those feelings didn't last long. Williams is so well suited for this project that it feels like its her who wrote the script. Director Jim Strouse almost certainly wrote this film with Williams in mind. Williams is able to handle some raunchy dialogue and feel like a legitimate human being. Her charisma really carries the film and I have all the hopes in the world for her future because there is a lot of potential with her.

James has a strong passion for theater and works at a theater school with young children. Her work is how the audience learns about the struggles that she hides so well. I do wish there where a little more depth in this aspect. The film itself is less than 90 minutes and I would've definitely watched more.

Get Out's Lakeith Stanfield plays Jessica's ex-boyfriend Damon who haunts her as she tries to move on with Chris O'Dowd. O'Dowd is basically the same likeable guy that he was in Bridesmaids and the moments he shares with Williams are the best moments in the film. Their back and forth was really sharp and believable thanks to some quick wit.

I've seen some complaints that the film ends on the formulaic side but I really didn't feel that way. It didn't follow the clichés that I expected it to. With the magnetic performance of Jessica Williams I can definitely recommend The Incredible Jessica James. I tend to be mixed on the Netflix originals but this is on the good side.

The Incredible Jessica James gets 69 out of 100