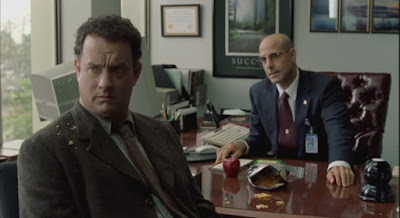 Steven Spielberg is known for basically creating the blockbuster film and even though he has pulled off some great dramatic "true story" movies like Schindler's List and Lincoln he is still going to be recognized as the director of Jaws, Raiders of the Lost Ark, ET and Jurassic Park before anyone ever thinks of those films. The Terminal doesn't feel like a Spielberg film at all.

The Terminal was the third collaboration between Spielberg and Tom Hanks with Saving Private Ryan and Catch Me if You Can coming before it. Hanks plays a man who is forced to live in the JFK Airport when his home country breaks out in a war and his passport is no longer valid. He quickly becomes friends with the employees at the airport during his extended stay.

As you would expect this film takes place in an airport almost entirely. The film opens with the beautifully recreated JFK airport and with Tom Hanks appearing in nearly every scene the film stays there for the majority of the run time. Watching Tom Hanks with an accent was a little jarring at first because its so rare to see him playing a non-American. Hanks' character speaks very little English at first and the whole "fish out of water" situation makes for some pretty good laughs right off the bat.

Hanks may be in a bit of a different role than we are used to seeing him in but he's still undeniably likeable. He gets into such a predicament early on and he tries everything he can to try and fit in and make the best of his situation. Stanley Tucci plays the man who runs the airport and his character was one of the main problems with the film. Tucci makes an effort to help Hanks out at first but he starts to play an unnecessary villain role as he tries to get Hanks out of his airport. Hanks isn't really doing anything wrong but Tucci seems to be playing a prick when he doesn't really need to be.

The film is quite light hearted overall but I was really shocked with how much humor there was. I laughed quite a bit. Hanks' character makes an effort to learn some English and starts to bond with some of the employees. A young Diego Luna takes him under his wing and Catherine Zeta-Jones weaves in and out as a flight attendant/love interest.

I don't really know why I'm bothered so much by the romance because Jones and Hanks share some good moments together but I think its because that subplot becomes invasive for the second half of the film but then the romance isn't really given a formal conclusion.

The Terminal is a really enjoyable family film, but it just doesn't end as well as it starts. If you can catch this on cable then its definitely worth your time. It may be a little long at well over two hours but I can honestly say that I would rewatch this movie someday. I guess I just have a soft spot for Spielberg and Hanks.