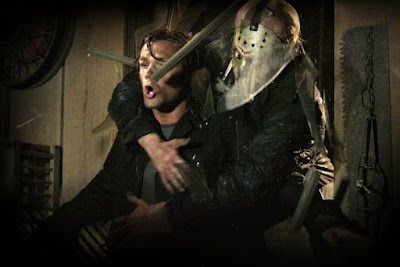 I've always considered myself a pretty big Friday the 13th fan. I bought a DVD combo pack of the first four films and I generally watch at least one a year. I don't know if I've ever seen any of the later entries more than once because they start to really lose track after the 4th film if you ask me. I saw remake after it hit DVD and always thought it landed in the middle of the pack considering all the Friday films.

The 2009 reboot is at the tail end of the horror remake produced by Platinum Dunes. Marcus Nispel, who directed the remake of Texas Chainsaw Massacre in 2003 was tapped to direct this remake as well and the screenwriters behind Freddy Vs. Jason were brought back to write the Jason Voorhees character once again. Michael Bay and original Friday the 13th director Sean S. Cunningham received producers credits.

This remake takes all of the tropes that people recognize from the franchise and dials them up to 11. There was so much sex in this film that (according to IMDb) Michael Bay walked out of the screening because of how over sexualized it is. There is a chick that goes water skiing topless just because and there are a handful of moments where the characters are naked just to exploit their bodies. Its a film made for high school boys.

Any character who is intended to be disliked is an outright prick. Travis Van Wickle plays an asshole that is such a prick that it starts to become unrealistic because no one is that heartless without being a psychopath. Then there are a handful of characters that get excessively annoying in true trademark Friday the 13th fashion. You can probably guess that they die in more brutal ways than the other characters.

The opening sequence has better moments than the bulk of the film and it takes a fair chunk (roughly 25 minutes) of the 90 minute run time. The only characters that are somewhat tolerable Jared Padalecki (one of the pretty boys from Supernatural) and Danielle Panabaker who plays the only girl who isn't considered a slut.

The reason I find the film at least fun to watch is because they do a decently good job with Jason. There are a few character beats that are a little off but the character looks about as intimidating as it ever did and the kills are relatively fun as well. They don't try to get too explorative with Jason's backstory which is the curse of several horror remakes they just reintroduce the mythology as most fans know it and then give them what they expect to see. I can't fault a film for doing what its supposed to do.