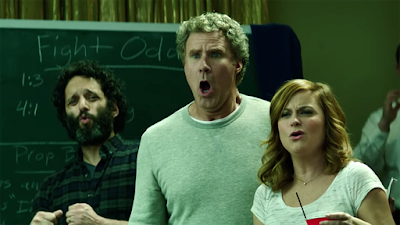 Will Ferrell's brand of comedy hasn't be as effective over the last 5 or more years. He gave us a handful of really funny comedies during the 2000s and I do believe that he's still pretty funny, but his efforts in Daddy's Home, Get Hard and Zoolander 2 don't come anywhere close to replicating Old School, Anchorman and Step Brothers. Ferrell basically plays himself now, and I'm not saying he can't still be funny as that character, it'd just be nice to see him shake it up. Teaming up with one of the funniest women alive in Amy Poehler sounded pretty good to me on paper. Unfortunately Poehler's efforts in the feature film department aren't that extensive lately either.

Ferrell and Poehler play husband and wife and parents to a young daughter who is just about to leave for college, but the evaporation of her expected scholarship puts the family in hot water. Their neighbor played by Jason Mantzoukas is currently getting divorced and they come up with the idea of creating a underground casino in his house so they can raise the money for college tuition.

First off, I thought this premise had some potential for some pretty good comedy, but the trailer never really looked any good and poor reviews also contributed to this film becoming a box office failure. The first twenty minutes or so are probably the strongest parts of the film. Poehler and Ferrell have a fairly cute relationship with their daughter and they do have some decent motivations for starting this casino at first. Unfortunately once the casino gets going things get a little more stupid. Poehler and Ferrell completely discard their regular life and basically become criminals that will do basically anything to help their daughter that they no longer pay any attention to.

The House really fails because it isn't as funny as it should be considering the parties involved. Nick Kroll also has a pretty sizeable role as a villain that didn't really need to be there. All of the actors seem to be trying to bring their own style of humor out in scenes that seem improvised for the most part. Every once in a while I got a good chuckle but this is a film that should be making you laugh every few minutes and it doesn't.