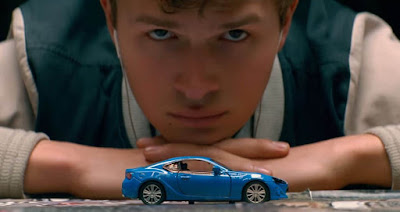 Edgar Wright is one of the most beloved filmmakers in recent memory and his filmography is nearly flawless. Wright is mostly known for the Cornetto trilogy (Shaun of the Dead, Hot Fuzz and The World’s End) and the cult favorite Scott Pilgrim vs. the World. Baby Driver is Wright’s first film since 2013 thanks to a lengthy period working on Ant-Man before eventually leaving the project.

As usual Wright also handled the script for Baby Driver and I’m happy to say that this film is easily my favorite film of 2017 so far. I saw it opening weekend and just saw it for the second time this past weekend getting just as much if not more out of it the second time. Baby Driver is primarily an action/heist film and really the ideal summer movie for anyone who enjoys the big blockbuster spectacle but Wright adds so much style and genius to the production that a viewer can go back to this movie and have just as much fun with.

Baby Driver is a pretty literal title. There’s a dude named Baby (Ansel Elgort) and he’s a driver, more specifically a getaway driver. Baby suffers from Tinnitus, a condition that causes constant ringing in the ears and he’s uses his music to drown out that ringing, even when he’s driving. Baby works for Doc (Kevin Spacey) among his ensemble of bank robbers including Bats (Jamie Fox), Buddy (Jon Hamm), Darling (Eiza Gonzalez) and Griff (Jon Bernthal).

Baby is such a big fan of music that the film could nearly be considered a musical. Edgar Wright said in an interview that the songs that were used were in the script from a very early stage and very few changed through production. Any attentive viewer will see lots of little Easter Eggs that follow the music and this stays fairly consistent through the whole film. I won’t reveal any because its so much cooler to see it play out on your own. Baby Driver has my favorite soundtrack in a few years and it was nice to hear a handful of songs that I didn't recognise. Too many movies are littered with 1970s classic rock soundtracks and while I love that music I still would rather have music that fits the film than songs I know. I immediately ordered the soundtrack on Amazon after I left the theater that’s how great it was and I've burned through it a few times on my turntable ever since. There are so many songs in the movie that the soundtrack is a double LP but there isn’t a point where the music gets excessive because it is such an important part of Baby's character. The soundtrack covers a lot of eras as well as a lot of genres as Baby is in possession of several IPods depending on what his mood is.

While this can be a film for music fans its also a lot of fun for people who enjoy car chases. There are multiple in the film and there are some pretty cool stunts that they pull off. One of the best ones was in the promo material. The majority of the stunts were real and the cast said that they were in the cars for most of them. The music adds a lot to these chase scenes too with high energy tunes blaring. There is also a great chase scene on foot that is just as thrilling as any in the car.

I’ve seen the reviewers lay a lot of blame on the romance and love interest played by Lilly James but I thought she was exceptional. The fact that she was fairly hot worked as well. James' character Debora doesn't get a lot of attention but James' cute innocent portrayal makes you feel for her when she ends up in the middle of the drama being guilty by acosiation. Ansel Elgort was probably the standout of the cast. He was so good that I was a little sad that he didn’t get the young Han Solo role after he was supposedly auditioning last year. He showed in The Fault in Our Stars that he was quite charismatic rather than being a cute teen icon and he further asserts his talent here. This guy has a lot of screen presence and I think he’s going to really make a name for himself with this movie.

Edgar Wright has always been able to create great characters and the always changing ensemble of crooks make for really fun additions to the cast. Jamie Foxx could be the standout of this cast who is imitating as hell and he lived up to the characters name Bats. Sometimes I forget how great of an actor Foxx he's done a lot of weaker projects since D'Jango. Foxx would probably be considered the main villain of the film although Jon Hamm obviously poses a threat as well. I really hope that his movie will serve as a jumping off point for his career post Mad Men because there is no reason for him to not be a movie star.

Baby Driver is probably going to be the best wide release of the summer and its easily my favorite movie of the year so far. This movie earned every cent that it got. Its a good standalone film that doesn’t spend any time trying a set up a potential sequel and its got some of the best action you’re going to see in 2017. The characters have some loveable quirks as well. I suggest that you check out Baby Driver ASAP. Its a great blockbuster but its also cinematic gold.