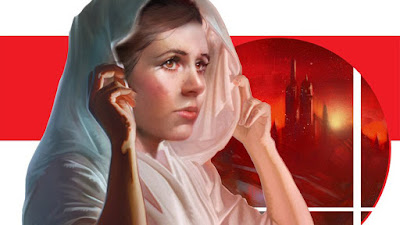 Claudia Gray is becoming one of my favorite Star Wars writers in the new canon. Leia: Princess of Alderaan will be her third full story in the canon. Her second novel Bloodline was quite possibly my favorite Star Wars novel of the new canon. With that book she proved that she knew Princess Leia as well as anyone. Leia is a return to young adult novels as her first entry in the canon Lost Stars was also aimed at young adults. This is a bit of a blessing for a guy like myself who is a bit of a slow reader, its quite easy to burn through this 400 page book.

This novel was one of two released on Force Friday and its one of the first in the Journey to the The Last Jedi line. This book contains a few hints into what could possibly happen in the upcoming film by introducing a few characters and planets that are already confirmed to appear in the movie.

Leia focuses on a young Princess Leia, at 16 years old. Her parents have been training her to become a young woman who is strong and loyal to her people. Leia has to complete 3 challenges (Body, Mind and Heart) in order to properly inherit the throne from her mother, but she finds that lately her parents don't seem to have as much time for her anymore. Probably due to their secret involvement in a rebel uprising against the Empire. Leia starts to do some investigating until she uncovers her parent's new top secret rebellion that has just begun to attack the Empire. She finds herself completely on board with their ideals at first, but her parents want to continue to shelter her from this world as some of the Imperial higher ups, like Tarkin are starting to find their trail. Her perfect image of her parents starts to be somewhat tainted as bloodshed begins. She begins to wonder why her parents would ever think to put her life on the line for the Rebellion.

Over the course of the book Leia tries to gain the respect of her family so they can officially get her involved. Her relationship with her mother and father is one that we've barely seen in Star Wars because the parental figures normally end up dead. You can really feel the love between Leia and her parents and both Bail and Breha Organa are really likeable characters. They are just reluctant to tell Leia everything because they feel the more she knows will get her in more trouble with the Empire if they were to find out about the Rebellion.

Leia starts to go out on missions with or without permission from her parents to worlds that have been damaged by the Empire's reign. She starts to earn the respect of the galaxy and its easy to see that this young woman will become the character we love in the original trilogy. There are a handful of characters that we know from the films who appear in the novel, but some of them are only heavily implied rather than actually referenced by name.

Leia meets her first love in the novel with a character named Kier and also develops a friend in Amilyn Holdo who will appear in The Last Jedi played by Laura Dern. Holdo is a very quirky character and for that reason alone I think she will make a memorable appearance in The Last Jedi. Holdo often speaks in metaphors and eventually Leia grows to like her after originally misunderstanding her. This book also lowers the possibility that Dern will be playing a villain because she probably has too much history with Leia to be evil now.

If you're going to read a novel before The Last Jedi comes out this is as good a book as any. It will probably contain the most teasing and its a relatively breezy read since its originally aimed at teens. That doesn't mean that the book isn't solid though. I'm not sure where I would rank this among the list of canon novels I have read but I would probably consider it to be better than Phasma.