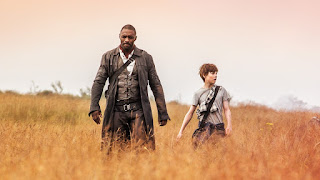 If you asked me back at the start of the year about the films I was looking forward to The Dark Tower would have been one of the films on my short list. I had only ever read the first book in the 8 novel series but I was well aware of the ambitious concept and how well it should've translated in to a successful movie franchise, but reviews and reports from studios scared me out of going to the theater to see it. The reviews were bad and the runtime clocked in at 90 minutes after some delays which is pathetic for a film based on a epic story like this.

The adaptation of Stephen King's famous series has been in development hell for probably at least a decade. JJ Abrams was originally attached to direct the project. Then Ron Howard was also involved for a little while (Howard actually gets a producers credit on the final film), but the film began production with Nikolaj Arcel. Fans of the series were doing dream castings of the two leads for years and the roles ended up going to Idris Elba and Matthew McConaughey as Roland and the Man in Black respectively. Both were castings that were enough to get me excited at the time.

The film opens explaining that The Dark Tower is the structure that holds our universe together, but the mind of a child has the power to bring it down and have the darkness from outside take over our universe. However, it takes a child with abilities to do so. The Man and Black (also known as Walter) has attempted to bring down the tower with multiple children but the gifted Jake Chambers seems to be the  only kid who can bring the tower down. Jake lives in a world that resembles our own but he has visions of Walter and Roland the gunslinger. Jake eventually finds himself in mid-world and his must team up with Roland to stop the man in black from destroying the tower.

Roland and Walter have some implied history before the film ever starts. They are both fully aware of each other. Roland is the last of the gunslingers and his father was killed by Walter who can basically kill anyone by saying "stop breathing" or "burn" but for some reason Walter's magic doesn't work on Roland and we never really learn what that is. Its one of the main flaws of the movie. Everything just "is" there is so little explanation about this universe and the characters. I don't necessarily think that the movie is boring or even really that confusing. It just leaves too much for the imagination. It just seems so reluctant to explore anything, it just tells the story and ends.

Elba and McConaughey bring a lot more than these characters deserve because no one is really helping them out. We just know that one is the good guy and the other is the bad guy. McConaughey's charm is really perfectly suited for Walter because he seems to get such a thrill in being bad, but apart from that there isn't much more to him. There is no impactful power struggle between the two characters. Elba does a few good moments with the young Tom Taylor as Jake as there is at least a little effort into making the characters have a father/son type relationship.

I almost feel bad for the people who have dedicated hours of their lives to reading the epic King novels only to have this film tell a story that doesn't necessarily resemble the books. It doesn't do anything that would make the books interesting to other people. When I saw that the ball was finally rolling on a film adaptation I thought about trying to approach the novels again, but now I'm glad I saw the movie first because it would have only frustrated me.

I found myself at least entertained by the ending. The final fight scene is quite solid and there is some cool gun tricks that Elba is able to pull off, but it could've been so much more impactful. I don't hate this movie at all. It just doesn't dig past the surface at all and it will end up as the film that wasn't awful, but no one loved it either.