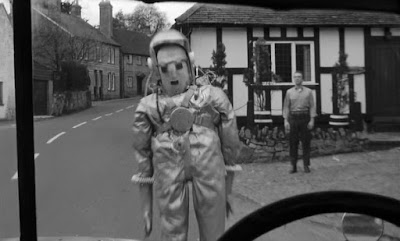 The Earth Dies Screaming has a far better title than anything else in the movie. The film starts out with the majority of humanity dropping dead suddenly and the question marks surrounding the instant deaths remain through the whole runtime. The budget on this project appears to be minimal with Hammer Horror helmer Terence Fisher directing.

The film is likely set in Britain and covers a very small scale and has limited locations. Willard Parker plays the lead American Hero Jeff Nolan, a "space pilot" whose profession saved him from being killed during this supposed attack. The film kicks off without any dialogue spoken for nearly the first ten minutes as Nolan continues to question what happened to Earth. He begins to find some survivors who have managed to live through the disaster because of unique circumstances.

The main cast is composed of about 8 survivors and they take shelter in one abandoned house and try their best to defend themselves against the small army of robots that are starting to gain control. These beings are able to attack humans through touch and they are can to turn them into mindless slaves that carry out their requests.

There is very little conflict between the cast and the silent and slow moving robot villains hardly pose much of a threat. Most of the dialogue is the crew discussing where they were when the event happened and how they have managed to survive to this point. There is no real extra level to any character. They make some small talk but not enough to get any idea about what their lives were like before the event. Willard Parker definitely takes charge of the cast as he appears to be one of the older members of the cast and he plays a worthy leader. One arrogant character has his own way of thinking and that character becomes as much a villain as any of the robots. The ensemble does provide an interesting look into what could possibly happen if this revolution were to occur. The robots and their slaves could actually have spawned some inspiration in George Romero for his classic Night of the Living Dead that came roughly 4 years later.

The whole film comes and goes in about 62 minutes and its a very meat and potatoes sci-fi film. the characters simply find out what it takes to defeat these invaders and then they do it. Then the film ends with many questions left unanswered and most of the environment is left unexplored. Everything about this movie stays on the ground level and that's why I have a hard time explaining why I liked it so much. It could be the atmosphere and the mystery surrounding the characters. The film is easy to digest, like most of the science fiction tales of its day, but it doesn't have the message that The Day the Earth Stood Still can boast. If you're a fan of early science fiction you'll probably find something to enjoy in this.