The Legends of Luke Skywalker: Review 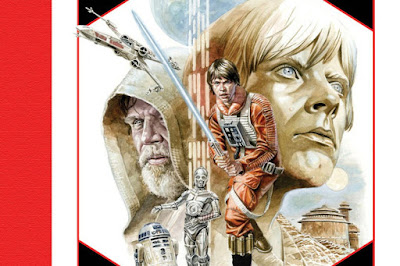 "Are you Luke Skywalker?"

The figure stopped but did not turn back.

From the moment this young adult novel was announced back at Star Wars Celebration this year I've been waiting patiently for The Legend of Luke Skywalker by Ken Liu. This is Liu's first full novel in the Star Wars galaxy but he did write a short story for the From a Certain Point of View collection that I have yet to dive into.

Most Star Wars fans are craving any little bit of information that they can get about Luke Skywalker during the gap between Return of the Jedi and The Force Awakens. The Aftermath novels intentionally sheltered Luke and Bloodline also only referenced him by name. Apart from the Shattered Empire comic we basically known nothing about what Luke has done over the last 30 years when we finally see him at the end of the Force Awakens.

I knew that this book probably wasn't going to tell us too much but when I finally got started I realized that this is merely an appetizer for Luke in The Last Jedi. If you start this book thinking you are going to get some juicy reveals about what Luke has been up to for the last 30 years you'll probably wind up disappointed. Liu really hits home that fact the narrators behind these stories are fairly unreliable. The novel starts out with conspiracy theorist claiming that Admiral Akbar never existed and that he was just used as a literal puppet by Mon Mothma and Princess Leia. It does introduce a different side of Star Wars storytelling though and I'll appreciate it for that. My first memories of Star Wars was being told the stories in school by some of friends before I ever saw the films and that brought me back to when I was a young fan. The issue I have with this is that it's not giving us the canon filler that I crave because its hard to say what you can believe and what is pure "legend". At the time of The Force Awakens its obvious that Luke doesn't have the role in the galaxy that he used to have. That is why Rey questioned his existence in the first place.

Luke remains very mysterious in most of those stories. He is always referred to as another name and there are always some hints that the character could be Luke but it seems like his identity is masked so if Lucasfilm wants to contradict the story in canon they can always retcon. There are lots of hints that make it nearly obvious that this character is Luke. He references quotes by Yoda (but his name is never spoken) and has a glove covering the hand that was cut off by Vader. The stories also take place in different times whether it is close to the timeline of the New Trilogy or shortly after the events of Return of the Jedi when Luke appears to be searching for new information about the Force. The stories appear to take place out of order but most are Luke simply looking for answers about the Force as he likely is planning to begin his new Jedi order.

As with most anthologies, some of the stories are better than others. There is one story in this collection that offers a different point of view to one of the scenes in Return of the Jedi. It just added another element to a story that I didn't need explanation for. There are a couple stories that introduce more primitive versions of the Force that were interesting.

Overall, this a pretty quick read but if you're not that interested in Star Wars canon this isn't exactly the best jumping on point. I never really felt like this book gave many hints to what may be in store for Luke in The Last Jedi. I guess now that we're at the point where we are going to be seeing him in just one more month I don't feel so disappointed.