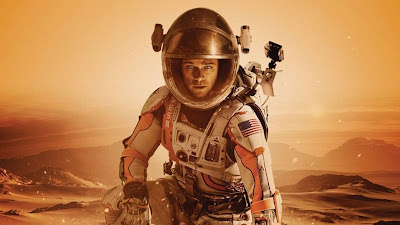 Its weird how opinions on films can change over time. I obviously never hated The Martian. I quite enjoyed it when I first saw in the theater a few years ago, but I was shocked that I continue to come back to it quite regularly as recently as on the weekend. That was when I truly felt that it was worthy of a "My Favorite Movies" post.

Based on the novel by Andy Weir that I did not read. The Martian is the story of Mark Watney, an astronaut who is part of a mission on Mars. When a storm hits unexpectedly hard his crew is forced to leave before it is too late. During their escape Mark is hit by debris and after a short hunt for him the remainder of his crew believe him to be dead and have no choice but to leave him on the planet. However, Watney surprisingly survives and has no way to interact with NASA or his crew mates. Watney, who happens to be an accomplished botanist and has no other option by to try and grow food that will keep him alive on Mars for long enough that NASA can rescue him.

Even when I watched it for the first time The Martian was a film that I wasn't expecting to be as good as it was. Director Ridley Scott had a long run of disappointing efforts at this point and I felt the same about the lead Matt Damon at the time. The films brilliant script obviously compliments both Scott and Damon. Drew Goddard adapted Weir's book with a lot of Watney's humor remaining in tact. I never found Damon to be an overly funny performer and the humor was never going to make your laugh out loud, but I appreciated the effort.

It is interesting to see how much I cared about Damon's character without any cheap turns like throwing a wife or daughter into the mix to try and draw out emotions. We know very little about Mark Watney's life on Earth, we do learn that his parents are alive, but that just about ends it. Damon's character becomes so enjoyable because of his determination. The man refuses to lay down and die despite all the turmoil that Mars throws at him and obviously the ending is well earned when all is said and done.

Outside of Damon the cast is huge and filled with a long list of solid names that includes Jessica Chastain, Jeff Daniels, Chiwetel Ejiofor, Michael Pena, Kate Mara, Kristen Wiig, Sean Bean and Donald Glover. It would just take far too long to note how many talented people are involved in this movie. Outside of Damon Jeff Daniels is probably the next biggest standout. He plays a necessary Devil's Advocate for the more positive characters as the cynical head of NASA while never going too far and becoming the villain. Ejiofor is among the best of the cast and is one of the more likeable characters in the film as the leader of Mars missions. The only person who I feel is a little miscast is Wiig and the dialogue written for her character is some of the weaker stuff in the script. Her humor could've been a little more subtle like they attempted successfully with Donald Glover's character. Its hard for her to be in a movie and not push some jokes on her but considering her role I don't think she needed to be making jokes.

The comparisons to Cast Away have been apparent ever since the movie released but it never feels like a rip off of that movie because it is in space. I couldn't get over how real the whole story felt. Its obviously not based on a true story, but sometimes I felt like I needed to convince myself that it wasn't. The politics of the whole situation is explored mostly through Jeff Daniel's brilliant performance showing that it really isn't as easy as sending a ship to Mars to pick Watny up. Plus, the design of Mars is nothing short of fantastic. It was the design of the planet that really took my breath away when I first viewed it in the theater, but it does still hold up for home viewings. All of the "movie science" is passed down to the audience without any real confusion, but it never feels like the audience is being lied to or taken advantage of.

The ending gives the audience the emotional payoff it deserves with Damon giving his best moments in the film. Rewatches have only reinforced my love for this very solid film and I'll likely continue to visit it time and time again. Its one of those films that are hard to dislike.