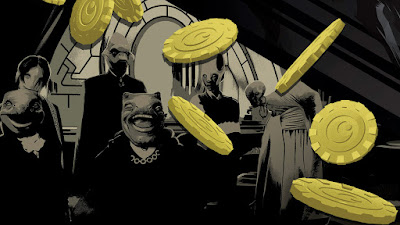 Canto Bight is another pretty different attempt at story for the Star Wars canon. The book is composed of 4 stories that are written by 4 different writers and each of the stories takes place on the newly introduced planet Cantonica which will appear on film for the first time in The Last Jedi. These stories focus primarily on one city on the planet Canto Bight (which is basically the Vegas of the Star Wars galaxy).

Each of these stories take place on one night in the infamous city. I have heard some rumors that some of the characters that appear in the book will get some attention in The Last Jedi, but as far as I can tell the characters that are introduced in this book are completely new to the Star Wars universe. So apart from some interesting insights into what this planet will be like it doesn't have a very big effect on the whole Star Wars story and that's okay. Its nice to see some books out there finally that expand on the universe rather than the characters we already know inside out.

Overall I thought the book was just okay. We don't really seem to spend enough time with any of the characters to really fall in love with them. Most of the characters find themselves in a bit of a dilemma and have to find their way out by any means possible. It seemed like the most colorful characters in the book were the ones that were the most guarded.

I never felt like I truly loved any of the stories in this book. I almost feel like they could've intertwined this story into one big story and made the whole thing a little more interesting. Still, the book is intended to be an appetizer for The Last Jedi and it probably did its job. I'm not going to ever go back to it though. From a Certain Point of View obviously contained many more stories that were a lot shorter in length, but they had the benefit of involving moments that we already recognized from the film.

I am seeing The Last Jedi today and there could be a treat or two for someone who has chosen to read this book. I may have not retained enough information to really notice though. Again, I was no where near hating this collection. I just never found that any of the stories really gripped me. It ended up being a bit of a chore to read.

The final story in the novel is written by John Jackson Miller, a writer who has already contributed a lot to the EU and already has one story in the new canon A New Dawn which was a bit of a prequel to Rebels. His story is probably the strongest of the group it was the only story that had characters that I truly enjoyed.

If you are fairly new to Star Wars canon this would not be a book that I would recommend to start out. It seems like it serves as something to hold fans over in the final days before the release of The Last Jedi and the people that leave the theater looking to learn more about Canto Bight.