I Loved The Last Jedi.... and That's Okay 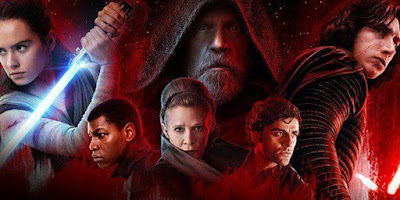 After a first watched The Last Jedi I was convinced that I didn't really want to talk about on this site, most just because everyone else's opinion is swirling around the net right now and I never really felt like I had anything more to say than the millions of other people who have been writing reviews or making tweets, but now that there is a huge uproar surrounding the Rotten Tomatoes audience score I felt that some positivity surrounding this film would be welcome, because when it comes to Star Wars we all know that the negative voices are always the loudest.

I appreciate The Last Jedi so much because Rian Johnson completely shifts what Star Wars is supposed to be. The formula that we are so used to has been completely shifted now. I'm glad that he opposed what JJ had. In some ways he is trimming the fat and focusing on the characters that are strongest in the trilogy. All the speculation around Snoke was brought on by the fans. JJ Abrams introduced Snoke but he's not leaving any questions as to who he is or how he became the leader of the First Order. He's just there. All of the speculation surrounding Snoke came after the fact. I cared less and less about the Snoke theories over the two year wait and it became more and more pathetic as they went.

I had in my head that Snoke was going to die in the film from the moment I saw the final trailer. The fact that they were teasing that a "throne room" scene was coming made me think that there is no way that Snoke can make it out of this film alive. The marketing was starting to make me think that Luke was never going to leave his island (a guess that was kind of correct) and we all know that when those characters enter the throne room that someone had to be killed. Rey and Kylo Ren are the two best characters in this new trilogy so we know that is would not be them.

When Rey approaches Luke with the lightsaber that belonged to his father and he throws it away I was thrilled. Its basically Rian Johnson turning towards the audience and saying "put your theories to bed, this is my story and I'm the one who is going to tell it, not you." Lucasfilm undoubtedly hired Johnson to change things up. Johnson ditches the whole nostalgia angle that JJ really aced. The one time that he does chose to use it Luke Skywalker calls it a cheap move. I almost hope that this starts some healthy competition between the two directors, because there is really no way that JJ can come back in Episode IX and return things back to a safe conclusion.

Seeing Luke Skywalker talk for the first time in 30 years left me satisfied. We understand why Luke is on that island and why he doesn't want to be involved in the Jedi order anymore and his character arc is one of the strongest in the film. I would say that it is second only to Kylo Ren. We get the Luke Skywalker hero moment that we all wanted to see. Plus, it showcases how powerful Luke is in ways that I could've never imagined. He got to go out on his own terms rather than have Kylo Ren shove a lightsaber through his heart. We can't say that for Han Solo.

There are so many fresh and new Star Wars moments in this story. Johnson's fascination with the Force has introduced some concepts that some people have been critical of, but I feel like the Force is able to adapt much like the people in the galaxy do. We have seen that many new force abilities under George Lucas and being at the helm should allow you to introduce new aspects of the Force.

Is the film perfect? Absolutely not, the Canto Bight sequence is a bit of a let down as many others have said, but when you are balancing three different stories at once it is hard for one to suffer a little bit. Canto Bight deserved more attention than Lucasfilm could have ever given it, but if I was the one that got to chose which story to cut out entirely it would've been that mission. Its still a very important part of the plot though. We also have the plot hole surrounding the map that may need to be explored in a novel or comic. It may glow a little bit more when you think about it, but to say that this one aspect ruins the whole film is a bit of the stretch.

When you look on Rotten Tomatoes and see that everyone who disliked the film is giving it one star or a half star rating because of one or two points. Those type of people lose all credibility with me because you can not doubt that the film is incredibly well directed. Even the small moments are so lovely like Luke giving C-3P0 a wink on his way out to face Kylo. Why is nobody talking about that? I really hope that even the people who hate it will give The Last Jedi another a chance either in theaters, as rental or even 5-10 years down the road. I think we had a real masterpiece on our hands this time around. The first masterpiece of the Disney era and I hope now that people have had their questions answered (even if they weren't what they wanted) they will realize that we got the film we needed.