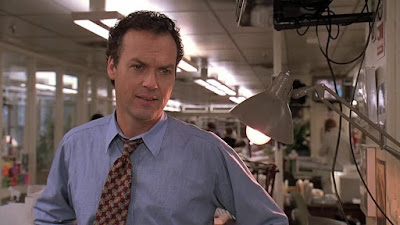 I always have a soft spot for news room films. With The Post hitting theaters soon I was interested in checking out a film I had yet to see which was The Paper. A film that tells the story behind the scenes of a New York newspaper over the course of one single day. The film is directed by Ron Howard one of the directors who I often have mixed feelings on, but still really like because when he's at his best he's one of the best.

The cast serves as a bit of an ensemble, but with Michael Keaton in a elevated role over the rest of the cast. Keaton plays the editor of the paper who has to balance both his work and personal life over this 24 hour time frame.

The script is co-written by David Koepp who is probably most known for his big action films (Jurassic Park, Spider-Man, Indiana Jones and the Kingdom of the Crystal Skull) but this script is very fast paced, very entertaining and far more comedic than you would expect. Most of the characters are full of fun quips and most of the humor still works today. Really upon completing this film I was a little shocked that it seems to have been swept under the rug when in the conversation about Howard's films. Its no where near his best, but its consistently good.

Keaton undoubtedly leads the way as the editor who is just starting his family (his wife is played by Marisa Tomei at the peak of her beauty) but seems to still be so passionate about his work. This film paints a newsroom at the perfect fix for an adrenaline junkie. Keaton's rapport with the other actors really works and he seems so perfectly suited for this time of environment. Keaton's character is considering a job at another newspaper on this day as well while also handling his regular duties at his current job.

Robert Duvall is Keaton's editor in-chief and serves as somewhat of a mentor to him, but Duvall doesn't consider himself worthy of admiration as he has put his professional life ahead of his family and now he's become estranged from his daughter. Although the mutual respect is there Keaton knows that he can't live his life the way Duvall has. Duvall has created an environment in his work where his employees feel like his family while he took the real one for granted. One of the subplots in the film focuses on Duvall searching for his long lost daughter that he barely knows.

There is a rivalry established between Keaton and Glenn Close's character as they seem to get a thrill in one-upping each other. Close's performance is quite good, but I never cared much for her character. Mostly because she seems to be a bit of insufferable bitch which Close is good at portraying if you look at some of her other roles, but I never felt like she needed to be as bitter as she was. In the third act the relationship between Close and Keaton really hits its pinnacle. Keaton seems to have more morals than the cold hearted Close as he refuses to print a story that he know is not true. He and one of the paper's columnists played by Randy Quaid begin a search for the quote that will give them their lucky break.

Overall The Paper is a charming and fun comedy that I can see myself coming back to a few years down the road. If you are ever fortunate enough to see this on cable on a Sunday afternoon you should watch it. I'll expect you'll be pleased by it.