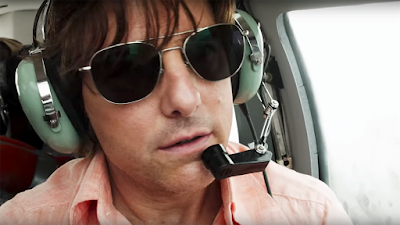 If you don't want to completely write Tom Crusie off after The Mummy then it could be worth your time to check out American Made. Directed by Doug Liman, who has recently worked with Cruise in Edge of Tomorrow. American Made is a film focusing on pilot Barry Seal, who basically smuggled anything for anybody in the late 70s to mid 80s.

Overall, I think this is a really fun movie despite not really doing much of anything new. Liman's portrays a film similar to Wolf of Wall Street that is fairly light despite some of the nasty stuff that takes place onscreen. It seems like ripping off Scorsese is what a lot of filmmakers have been choosing to do these days. The man is obviously a big influence. Liman often uses Jimmy Carter and Ronald Reagan to explain the state that America is in at this point and I thought that was a cool device.

I went into the film having no idea who Barry Seal was and really this film captures how wild his story is, but doesn't necessarily give us that much information about the man himself. Cruise is in classic form as Seal and his charisma is probably the main reason that the movie is so watchable. Seal seems to win many allies because they are captured by his charm and that seems to be why he got so much work from so many groups and basically made more money than he could ever spend or launder.

The lack of substance to the character does start to hurt the movie when it reaches its peak. Seal's affiliations build to the point where it gets confusing, and we don't really know why Seal has gone so far. There is no member of the supporting cast that really gets enough attention to be memorable at all. Obviously no one in the cast is able to match Cruise's star power. Sarah Wright (another of Cruise's love interests that was born after the release of Risky Business) who plays Cruise's wife is completely fine, but Seal honestly just doesn't appear to care much about his family. We don't really ever learn what motivated Barry because it doesn't appear to be his family.

American Made is a less impactful version of many different films, but its light and fun enough that its a worth while use of your time. It also gets Tom Cruise in the cockpit of an airplane again with some aviator sunglasses and that's all we really want isn't it?