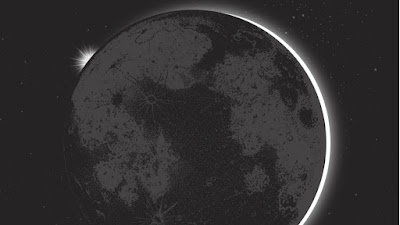 Now that we seem to be on a bit of a break for Star Wars novels I've decided over the past few weeks to join Goodreads and begin reading some books that aren't Star Wars. I haven't read a non-Star Wars novel and at least two years. I have had my eyes on Artemis for a few months now. Its written by Andy Weir, the author of the very popular The Martian and the film adaptation was already in development before the release of the book with Phil Lord and Chris Miller joining as directors after being dumped from Han Solo.

Artemis is told from the perspective of a woman named Jazz, who is Saudi Arabian, but has lived in Artemis ever since she was 6. Artemis is the first ever city on the moon. Jazz has been a small time criminal ever since she was a teenager and now smuggles illegal items into Artemis for community members under the disguise of her legal job, as the Earth equivalent of a mail woman. Her estranged father lives in Artemis as well, but Jazz has ditched her Muslim heritage in favor of drinking and sex without marriage.

One of her customers offers Jazz the opportunity of a lifetime: sabotaging some machines for her powerful client so he can take control of an aluminum company on the surface of the moon. Her reward is one million dollars. When her mission goes terribly wrong Jazz begins to peel back the layers and her situation becomes more complex than she expected.

I'll come clean and admit that I didn't read Weir's debut book The Maritan but I obviously fell in love with the movie years later. I really didn't care for the book when all was said and done because in a lot of ways it seems like nothing more than an attempt to get another movie made. The book has a great concept, but the book clocks in at just over 300 pages. Its a very quick read considering the world it has to build. The environment is built over the first 100 pages and the plot hardly gets underway at all. Then it just feels like it unfolds a little too quickly. The climax of the book doesn't really reach the level that I thought it would and it feel like it such a smaller scale than I wanted.

I'd assume that Jazz is an attempt to create a female version of Mark Watny from The Martian and I think my main issue with the character is that she seems like a female character that is written for men. Jazz is very outgoing about sex and very confident in her own skin and I'm sure that there are some women who are like that, but it just seemed a little amateur to me. Jazz isn't exactly as likeable as I felt she needed to be either. She shows a little heart at times, but I hardly felt like the character had that much of an arc over the course of it all. Although Jazz is conveniently good at everything and seems to be intelligent enough to get herself out of any jam she finds herself in. The characters that surround Jazz don't really get enough attention to be memorable though there were a few, most notably her tech savvy friend Svoboda, that I liked enough, but just didn't get enough of a role to stick with me.

I'm sure that The Martian could be considered quite science heavily as Artemis falls into the same category. There are a lot of scenes where there is so much science that it is quite hard to comprehend everything. Weir appeared to have put a lot of thought into this aspect, but I do think it makes the novel feel a lot more difficult to read for a casual reader.

If you are a fan of Weir's writing I'm sure you could get some enjoyment out of Artemis. I've looked around online and there are a lot of people who seemed to have liked it a lot more than I did, but after taking a peek on Goodreads there were a lot of fans of his first book that weren't overly happy with his efforts this time. I'm sure its worth trying out if you think its worth the gamble. Now I'm trying to move on with another Star Wars novel and then get Ready Player One finished before the release of the movie.