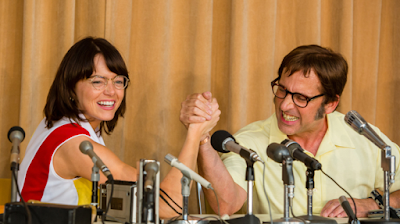 I will honestly say that I'm not a tennis fan at all, but Battle of the Sexes still was interesting to me based on the cast they had built. Its also the two directors behind Little Miss Sunshine working with Steve Carell again. Overall I think this is a very entertaining and inspirational film, but it just doesn't quite reach the level that I would hope it could.

The film is based on the true story surrounding a tennis match between former world's number #1 man Bobby Riggs versus the world's #1 woman Billie Jean King. The match was a huge event on television thanks to the goofy antics and sexist comments by Riggs which appeared to be just an act in order to drag a bunch of money from sponsors.

Going into this film knowing nothing about the match at all I was impressed by how significant the whole competition was. I wasn't expecting the importance this moment for women in sport and women in general. Its shocking how much sexist attitude was still present at this time in the early 70s.

Emma Stone is fantastic as Billie Jean King and I'd love to see her generate some more Oscar buzz again this year for her role here. In her professional life King was a determined woman who worked hard to gain every inch of respect she got and never appeared to be doing this match for the money, but to make an important statement. The film basically kicks off with King and several other women throwing away good money because they weren't getting equal pay to the men. In her personal life King is much more conflicted and she struggles with being a lesbian despite being married to a man. I wasn't really expecting King to become such an important figure in my eyes. King begins to fall in love with a hair dresser played by Bloodline's Andrea Riseborough who is also quite good in the film. King's sexuality wasn't the point of focus that I expected and she didn't reveal her sexuality until years down the road.

Unfortunately, I'd expect that this movie would've been stronger if it was more of a biopic for Billie Jean King rather than have her share the spotlight with Bobby Riggs. There is nothing wrong with Carell's performance as Riggs, I appreciate the filmmakers for bringing a fresh performance out him like they did so many years ago with Little Miss Sunshine. King is much more compelling than Riggs is and the attempts to make him somewhat empathetic don't work. Riggs isn't necessarily a complete asshole, he's just more than willing to play a villain if it means a profit for him. I was just so much more invested in King's story. The rest of the cast give pretty good performances as well. Alan Cumming was pretty memorable as King's gay wardrobe man. Sarah Silverman is good for a few laughs and the women who is probably King's manager and its always nice to see Elizabeth Shue who plays Riggs' wife.

While I did mention the significance of the actual tennis match I can't say that I was really that engaged by it. It may come from not being a tennis fan in the first place, but I think the result of the match is more important that the competition that took place.

This film definitely brought more interest into this true story, but I feel like it would've worked better if it was a Billie Jean King biopic rather than splitting the screen time with the uninteresting Bobby Riggs. Emma Stone probably deserves a nomination for an Oscar for this one.