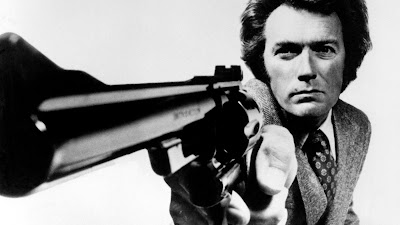 Dirty Harry immediately became one of my favorite cop/detective movies from the first time I've watched it. I've revisited it a time or two since then but for some reason I never thought to watch any of the 4 sequels to the film until now. Magnum Force is the first sequel and the longest in the Dirty Harry franchise.

Don Siegel, a frequent Clint Eastwood collaborator who directed the first film did not return for the sequel and Ted Post, who had already worked with Eastwood in Hang 'Em High and some episodes of Rawhide was brought in for this sequel after Eastwood himself declined it. Buddy Van Horn, who would direct the final entry in the franchise The Dead Pool, served as the second unit director on this film. Apparently this sequel was based on an idea for the first film that was thrown out by Don Siegel.

You don't have to have seen the first Dirty Harry film to understand what goes on in Magnum Force. As far as I know nobody from the original cast returned apart from Eastwood. In some ways I feel like Magnum Force could work better without seeing the original movie because Harry Callahan is adjusted quite a bit to bend the rules a little less. To put it simply Harry isn't as dirty this time around.

Callahan is forced to look into a group of cops that are appointing themselves judge, jury and executioner of several known crooks in San Francisco. The film opens with the murder of a man with mob connections who was acquitted. Unlike the first movie the killers are hidden from the audience through a lot of the film.

With the villains habiting a little more of a gray area Harry seems to be a little lighter this time around. Obviously he would've looks like a bit of a hypocrite if he was squaring off against these cops when he brutally beat a man in the first movie. The decision to change the character a little bit may have come after some criticism surrounding the "hippie like" killer from the first movie that Callahan basically had to go beyond the law to eliminate. This time we see Eastwood show a little more humanity. I still don't like it as much as the first one, but I must say that I really enjoyed it. These cops are essentially more corrupt than Harry is even though he isn't really corrupt in this film at all.

There are a few things that I don't like about the movie but the most obvious is that there is a lot of scenes that seem to dropped in there even though they don't add much to the result of the movie. There is a scene where Harry takes on a couple of plane hijackers and there is this love interest character that doesn't seem to have much of a point either. Harry doesn't end up with her at the end of the movie. Still the film definitely saves the best for last as there is a pretty cool little car chase and showdown, even if there is a twist that is pretty predictable by today's standards.

The film co-stars several young men who would go on to play cops on television. David Soul of Starsky and Hutch, and Robert Urich of S.W.A.T both appear. Suzanne Sommers from Three's Company also appears in a uncredited role where she gets shot while topless in a pool. While the controversy around this film doesn't appear to be as prominent as it was around the first movie but it was blamed for inspiring the Hi-Fi murders a year later as some of the victims were forced to drink drain cleaner like a prostitute that was killed in the film.

The film grossed over 44 million at the box office which was an improvement over the first movie. Its success meant that the third movie in the franchise The Enforcer in 1976 and two more Dirty Harry films came in the 1980s before they ended for good.