2017 is just wrapping up and we are getting into the new year. 2018 has a few promising titles that have peaked my interested. Here are the ten that are most significant to me. I don't think that there are as many movies that have made my mouth water compared to last year although there was a lot of stuff that brought disappointment. I'm not going to bother listing the films backwards I'm going to order them from most anticipated. 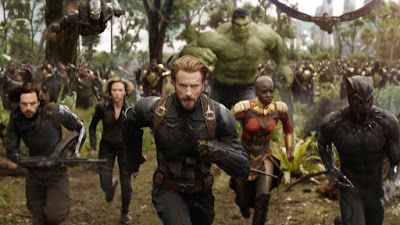 1. Avengers Infinity War: I do find myself getting a little tired of Marvel over the past few years, probably because everyone really seems to believe that these movies get so much attention leading up to and after their release. I actually have yet to see Ragnarok, but 2017 seems to have been another solid year for Marvel quality. Spider-Man: Homecoming was one of my favorite Marvel films yet. I didn't love Guardians of the Galaxy Vol 2, but I do intend to give it a second chance sometime soon.

We've already gotten the trailer for Infinity War that has probably increased my anticipation over some other entries that we have yet to get trailers for. Obviously the whole MCU has been building to the moment when Thanos shows up to destroy the planet. The trailer brought the Avengers theme back that I've been missing and I'm interested to see if Marvel will finally bring an end to some of these characters and Thanos can be the villain that they've been building up over the last 10 years.

The Russo brothers definitely do have their work cut out for them. We haven't gotten an Avengers film since Age of Ultron (that I seemed to like more than everyone else) and it appears to be bring a chapter to a close. It'll need to bring some finality while also bringing the fun that most of the Marvel movies have done well since Iron Man.

2. Halloween: I'm sure some of you would consider this to be a little high, but finally seeing John Carpenter come back to the series that he started means a lot to me. Carpenter's catalogue is essentially as good as any directors. The 40th anniversary of Halloween also happens to hit this year and its been the first time since Halloween III: Season of the Witch that Carpenter seems to have any influence at all.

David Gordon Green, a very capable director is helming the movie and we already know that Jamie Lee Curtis is returning for the film that will be a direct sequel to the first movie and erase all the others. The original Michael Myers Nick Castle is also returning. Danny McBride weirdly collaborated on the script, but I'm glad to see that the franchise seems to be in the hands of some hardcore fans that want to make a solid movie.

3. Solo: A Star Wars Story: Its hard to be too hyped for this movie considering all the issues that have gone down behind the scenes and this movie is only 5 months out and the trailer is still no where to be seen. Its Star Wars though. However this has been the first time since the return of Star Wars that a Star Wars movie wasn't my most anticipated film. Lots of fans would argue that this movie didn't need to happen, but I've been pretty happy with all the casting especially Donald Glover as Lando.

Lawrence Kasdan's script for this movie was extremely well praised and Ron Howard can often deliver some pretty solid flicks when he's building from a great script. Hopefully a solid trailer will get people on board with this movie and Alden Ehrenreich can do the impossible and pull off Han Solo.

4. God Particle/Cloverfield Movie: I loved 10 Cloverfield Lane, it felt like it was starting a fresh spin on the cinematic universe craze. I have no idea how it connects to Cloverfield if it connects at all, but its reminded me a lot of George A. Romero's Living Dead franchise. I'm really not even a huge fan of the first Cloverfield movie, but this sequel/prequel/whateveritis really worked for me. This movie is supposedly set for a release this year, and there has been some reports that this God Particle movie is a Cloverfield film and if it is I'm hyped.

The cast that has been built isn't full of stars, but there is a lot of very capable talent like Chris O'Dowd, David Oyelowo and Daniel Bruhl. With 10 Cloverfield Lane we never saw a trailer until the film was very close to release, but with JJ Abrams, who is famously secretive I have no idea what to expect. 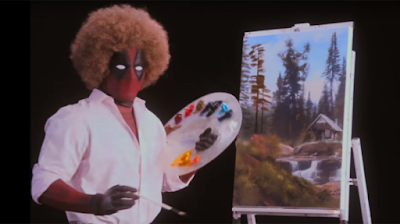 5. Deadpool 2: I've been surprised with how many times I've come back to watch Deadpool since it was released. I'm not a guy who see the same movie more than twice a year, but I've return to this movie time and time again and continued to have a really good time with it. We lost Tim Miller who directed the first movie and I did feel like new director David Lietch's film Atomic Blonde was a bit of a dud, but Ryan Reynolds seems confident in what to do with this character.

Josh Brolin coming on as Cable has me excited to. That little Bob Ross style teaser made for a fun little clip. I'm not expecting this to rival the first movie in rewatchability because it seems like this may be a bit of an attempt to set up X-Force, but I'm anticipating it none the less.

6. The Incredibles 2: I enjoyed The Incredibles quite a bit as a kid, but it wasn't one of the Pixar movies that I thought about coming back to until a few years ago. It was then that I really fell in love with the film. I've watched it again in the time since and I'm happy to see that they brought Brad Bird and the rest of the cast back for a sequel.

That teaser that we got a few weeks ago wasn't much of an indicator about what we were going to get, but its Pixar and they rarely fail me. Its reportedly following up on the original movie so I'd expect The Underminer to be the new villain, but we've still got a lot to learn about this movie.

7. Black Panther: Chadwick Boseman's Black Panther seemed to get a lot less attention than Spider-Man did in Civil War, which was unfortunate because of how well executed the character was. Ever since its was announced Black Panther is a movie that I've been really looking forward too. Ryan Coogler from Creed managed to score the directors job and his record is spotless for the time being.

Black Panther's cast is one of the most stacked in Marvel's history to date, but it seems like every A-lister wants to be a part a Marvel property now. Marvel's execution has been so good of late so it hard to doubt the strength of this movie considering the people involved. The trailers made the movie look a lot more ambitious than I was expecting too. 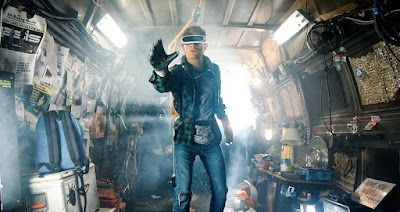 8. Ready Player One: This is another sort of weird choice for me because the Ready Player One novel is currently sitting on my bookcase unread. I am promising myself that I'll finish the book before the movie comes out in March. The time just seems right for Ready Player One to come out and blow us away.

Steven Spielberg has been releasing some good films over the last little while, but none of them really showcase the imaginative side of the man that we haven't seen in a while. Ready Player One looks ambitious although the novel appears to borrow some concepts from some other famous works. It appears to have the nostalgia that everyone seems to be going crazy for.

In a world where Stranger Things, IT and Star Wars are as cool as they've ever been Ready Player one should be a huge success if its good.

9. The Equalizer 2: Denzel Washington is my favorite actor of all time and the first Equalizer movie is one that I ran out to see quite quickly. Its hard to believe that Denzel is doing his first sequel this far into his career, but the first one was an action movie that was a lot of fun and Denzel elevates anything that he's involved in. I don't know much about the plot because it doesn't come out until August.

One of Washington's common collaborators Antoine Fuqua (who also directed the original) is returning as are Bill Pullman and Melissa Leo. We'll see how this one turns out.

10. Bohemian Rhapsody: Unfortunately there is a bit of drama surrounding this film right now, but I'm always really interested in a music biopic. Freddie Mercury was a legendary frontman who is basically second to none onstage. All we really have in terms of marketing is a few photos of Rami Malek as Mercury, but this film isn't going to hit until the Christmas season.

Thanks to all the drama with Bryan Singer a new director has been brought in to finish the movie. I would hope that it doesn't result in a messy movie, but I'm very interested to see how it turns out. Mercury isn't a guy that I much about beyond his music and his struggle with AIDS so I'm always happy to learn more through a biopic.

These are the top 10 films I am the most excited about this year. I also composed an extra 10 because sometimes 10 isn't enough. Check out my Letterboxd page for the full list.