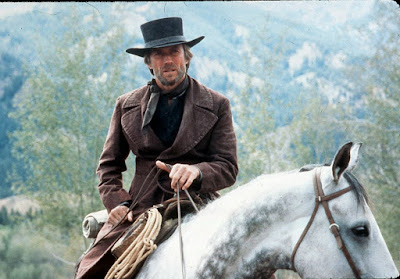 One of my biggest blind spots as a film fan are classic westerns. John Wayne and Clint Eastwood's classics are almost entirely absent from my watched list. When 2018 began one of the things I promised myself I was going to do was watch more Clint Eastwood movies. I've seen a lot of his films that came out since Unforgiven whether he was starring, directing or both, but most of his movies that land before 1990 I'm still waiting to see.

Pale Rider is the first western Eastwood made since The Outlaw Josey Wales and its the last he made before he retired from westerns with Unforgiven. During the 1980s the western genre appeared to be on its last legs, but then Eastwood had some solid success producing, directing and starring is this classic traditional western.

The film takes place a town that is controlled nearly entirely by one gold miner named LaHood. The film starts out with some of LaHood's thugs destroying a small community of prospectors who are living on the land he wants. The members of this small town are beginning to get desperate when Eastwood enters town as a mysterious man known only as "Preacher." The audience can easily assume a lot of things about his character but not much about his past is concrete. He has been shot 5 times in the back and is still the fearless badass that you've expected from Eastwood.

Eastwood helps the members of the prospector community to stand up against the much more powerful LaHood. Michael Moriarty leads the group and he and Eastwood develop a mutual respect as Eastwood goes over and beyond the call of duty to defend these people he hardly knows. The plot is really straightforward and doesn't even really introduce a different concept for a western. It takes a classic story and it does it well.

There are some not so subtle undertones that surround the film, but I never felt like I was being bashed over the head with it. Without spoiling anything there may be a reason that Eastwood's character was so unstoppable and its something that Eastwood has confirmed since the movie was released. The final confrontation between Eastwood and the corrupt marshal as his crew is outstanding. If you're a fan of a classic western than this will probably tick all the boxes for you.