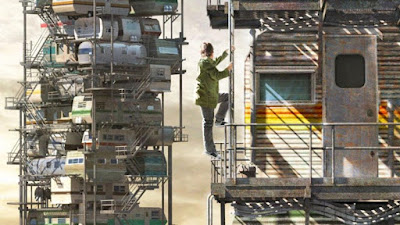 Ready Player One is one of the cooler novels I've read in a long time. Its one of those books that should appeal to a fairly narrow audience of geeks, but it ends up being quite universal. I'm picking up on this book quite late, but I've heard enough great things that I decided to invest some time into reading it. It was originally published in 2011 and the film adaptation directed by Steven Spielberg is hitting theaters this March. Its on my list of most anticpated for 2018 and I'd probably choose to move it up to probably 3-4 on the list if I could change it because I loved this book.

Ready Player One is set in 2044 where resources have been stretched thin and the majority of the poor people were forced to move closer to the cities. Global Warning has also began to take its toll on the Earth. Wade Watts is an orphaned teenage boy who lives among the "stacks" (a trailer park so full that the trailers began to get stacked on top of each other) where he lives with his aunt and some other families who can't afford to live on their own. Wade is provided some escapism with OASIS, a video game that basically creates its own society.

James Halliday, who created OASIS dies in the opening chapter of the novel and it marks the beginning of "the contest." Halliday hid an Easter Egg inside his creation and the person who could find this egg will inherit the game as well as all the money that comes with it. In order to find the egg the "gunter" (a hunter of the egg) must have a good working knowledge of pop culture from the 70s and 80s the era in which Halliday grew up. This includes classic video games, movies, television and RPG games.

Ready Player One is essentially a wonderland for geeks, but I think it can still be a really compelling story even if you don't have a lot of information about the movies, games, etc. that inspired it. I'm sure its a more rewarding experience for the people who have, but there were several movies and video games that I had never seen that didn't effect my enjoyment of the book. Nostalgia is such a key part of culture now that being a nerd is a little more acceptable.

The book works because I fell in love with the characters. Wade is established as a character that I could care about. He is well immersed in Halliday's game, but his misfortune has limited how far he can go in the game. OASIS is free to join, but all the in game purchases limit his search for the egg. In lot of ways he resembles Charlie from Charlie and the Chocolate Factory. Obviously you can find a little Luke Skywalker in the character as well which is always good to see as a Star Wars fan.

In the OASIS Wade has friends that he has never met in person. His loveable friend Aech can only spend time with him through the game and it seems that even asking to know more about the person behind these creative avatars may be a little frowned upon. Wade also meets a girl named Art3mis who he quickly develops a crush on, but she seems interested in keeping him at a distance. Especially as they are both rival gunters.

I was really impressed by the development surrounding the villains. There is one huge corporation IOI that gets involved in the game in order to take over the huge asset that is OASIS. They do so by paying people to hunt on their behalf. These people are called "sixers." The leader of the sixers is named Sorrento (who will be played by Ben Mendelsohn in the movie, can't wait) and he frequently demonstrates that the Sixers will do anything they need to do to take over OASIS, even if that means killing their rivals.

It's really just an addictive book that I will definitely be recommending to a lot of my friends. I'm sure there are a lot of people out there who have already read this book through a few times as it is 7 years old now. Ernest Cline had already come out and revealed that he's currently working on a sequel. My guess for the title will be Ready Player Two and while the trailers for the film seem to be deviating a little from the book I'm very excited to see what they come up with in the film adaptation. Cline is a co-writer on the film, but we know with movies like The Circle that it may not always be a good thing.