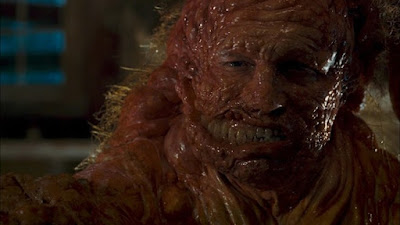 Sometimes, there is no one who can make a horror movie like a horror fan. With Slither James Gunn gives us some 80s horror nostalgia while still bringing some originality and fun characters to this story. There are certainly some homages to some previous existing work and that only complimented my enjoyment of this movie. I recommend it to anyone who considers themselves a horror fan.

The film gets underway when Grant (Michael Rooker, who has since become a good luck charm of Gunn's) comes into contact with this alien parasite that has landed in the woods of his small town of Wheelsy, South Carolina. The parasite immediately takes control of his body and he begins doing very odd things like buying large amounts of meat at the grocery and eventually he begins to turn into this slug like monster with tentacles. I would consider it similar to Stuart Gordon's From Beyond in appearance. Police chief Bill Pardy (Nathan Fillion) and Grant's wife Starla (Elizabeth Banks) are unable to figure out what is wrong with him until it is too late and Grant has already unleashed some offspring that cause members of the town to become his minions. Slither is hard film to explain without visual aid, but its a lot easier to comprehend on screen.

Very rarely have I seen a film that really balances horror and comedy perfectly. Sure, the horror comedy mix was a very popular genre in the 80s but over time the jokes start to fade. Slither still has a lot of time to do that as its still on 12 years off of its release, but I was shocked by just how naturally funny this movie is, but the horror is not sacrificed at all either. There are some moments in the film that I was completely horrified by and there are several. In true 80s fashion it appears that Gunn uses practical effects whenever he could and they are really effective. As Michael Rooker's character starts to evolve into monster there is almost no trace of him at all.

The whole cast is really fun and the characters are developed well enough that I fell in love with them. Nathan Fillion is so causally funny that I really latched on to him. Then you have another James Gunn favorite Gregg Henry as the hilariously republican mayor of the town. Elizabeth Banks is a character that we've seen before but she plays it well.

Slither is nice and short and is completely engaging for the whole runtime. Plus, it introduces a really cool creature/villain that is completely unpredictable despite being similar to Alien. Its one of the most straight forward and fun horror films. I completely understand why Marvel went after James Gunn for Guardians of the Galaxy.