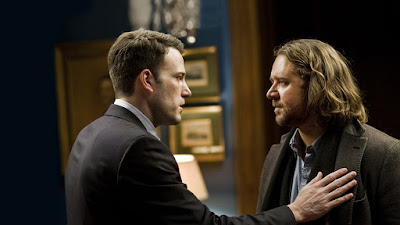 State of Play is based on a miniseries that aired in Britain in 2003 directed by David Yates. It is not a series that I had explored before. This American version is directed by Kevin Macdonald, director of The Last King of Scotland. The film definitely has a feel reminiscent of the political thrillers of the 1970s.

Russell Crowe plays a veteran reporter for the Washington Post who gets caught up in a mystery surrounding the death of a congressman's head researcher and mistress. The congressman, played by Ben Affleck happens to be Crowe's former roommate. While other outlets consider the death a suicide Crowe has reason to think there may be more in play.

The film is quick paced with a all-star cast that is consistently great from the star to the supporting cast. There is no point in over the runtime in this film where the mystery hits a snag. The fact that the original miniseries was actually six parts worried me a bit going in, but at just over 2 hours it doesn't feel overstuffed or too short. Its consistently interesting, the script is sharp and there are several revelations that creep up without the audience expecting.

Crowe is one of the best actors in the world and he proves to be in peak form. Sporting some long and uncombed hair. His reputation and experience are basically unmatched, but Crowe finds himself paired with some new blood in Rachel McAdams, a young woman who shows some instincts despite being blogger for the Washington Post website. McAdams is the most naïve and moral when compared to Crowe and the Post's editor played by the magnificent Helen Mirren.The rivalry between the new and old begins to smooth a bit but I was glad that it didn't result in a forced romance by the end of the film.

Even though Crowe is certainly able to pull off the confidence of an established reporter there are some elements of this mystery that occasionally get handed to him. The film doesn't make a habit of it though. I also felt like the last reveal coming at the end of the movie may have just been one too many turns. Overall, State of Play is a very well made and well scripted political thriller that should be remembered.